Surround Yourself with Things You Love 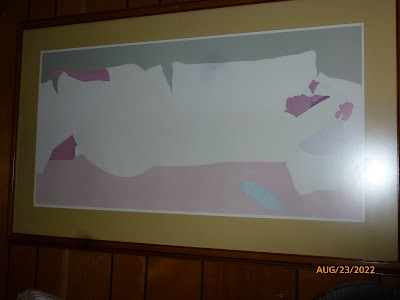 Since I was a little girl I have always dreamed of having a Pegge Hopper painting or print.  Pegge Hopper was my favorite artist who painted gorgeous Polynesian women.  I grew up seeing her original paintings at the resort my father managed.  She and my father became friends as he commissioned more paintings for the resort.  When my father retired, she painted an original painting for him.  What an amazing gift!  It now hangs proudly in my baby brother's house since both he and his wife were born and raised in Hawaii.

So, for years I have been on the hunt for a print or original painting of Pegge Hopper's to have for my very own.  Imagine my sheer delight when I spotted this beauty tucked in way up high hiding behind a bunch of junk at a thrift store.  I had some taller men get it down for me and we tried to make out the signature since it was faded.  I was sure it was a Pegge Hopper so I bought it, brought it home, researched it and found out I had scored me a Pegge Hopper!  My childhood dreams had come true!

Now I know that not everyone would be as thrilled as I am given that it is a bit sun faded, but for me it transports me back in time to my childhood.  The resort, where I first saw Pegge Hopper's work and later where I saw similar paintings (like the one above) she did later in my teens, was my second home.  It was not your typical high rise run of the mill place...oh no.  It was modeled after the different styles of traditional Polynesian houses from all over the pacific.  There were individual thatched hales (bungalows) scattered among tropical gardens, some with sea views and others with garden or pond views.  There were hammocks on the beach or under big trees to take naps on or just lay there and look up at the sky and daydream.  There were the petroglyph fields to explore (I even discovered some new one that had not been found yet by the resort staff and my father was thrilled).  In the early days there were wild goats and donkeys to catch and relocate to safer places.  Long walks along the beach discovering shells or just looking out across the ocean and listening the the waves lap up onto the shoreline were a perfect escape from some of the chaos that was going on in my childhood.  I learned to sail the Sunfish sailboats, snorkel, play with the manta rays at night that would come in to feed and made lots of friends over the years.  Some of those friends became part of our "family" and would later come to Jeff and my wedding and then spend time with Jeff, our kids and I, along with my parents up in Montana.

For me, the signed print above is more than just a piece of art.  It is a link to my childhood and the people and places I loved.  Some of those people have passed on and the resort, as I knew it, was destroyed by the big tsunami that hit both Japan and Hawaii.  The resort is finally being rebuilt, but the original buildings had to be torn down to begin with.  There are now new buildings in a different and more "uniform" style.  Although they are beautifully done, it is not the same place that I grew up at running freely as a child along the paths and creating of the best memories of my life.  Some of the paintings that I looked at in my childhood that led me to my love of Pegge's artwork did survive and were put in storage.  They will grace the new buildings in some way, I am sure.  They were an integral part of the history and beauty of the resort and I know the former guests that are waiting to go back have made it clear they want to see them again.  Luckily the new owners of the resort were former guests there also, so they know how important these paintings are.

The print above now hangs in our guest bedroom, where I usually sleep since Jeff flips and flops a lot at night and which leaves me exhausted since he wakes me up each time he does it.  I can see it each morning as soon as I open my eyes to greet the new day and it just makes me feel calm inside.  Calmness is something that in the past did not come easily to me in the mornings.  Now it does because I see something of beauty that transports me back in time to a place I loved first thing in the morning.  I think we all need some things in our lives that remind us of happier and calmer times, especially now with the way things are going in the world.  I see the print above as a gift from God that came right when I needed it most. So my message to anyone reading this is to surround yourself with things that you love and have meaning to you.  It will make for a happier you!