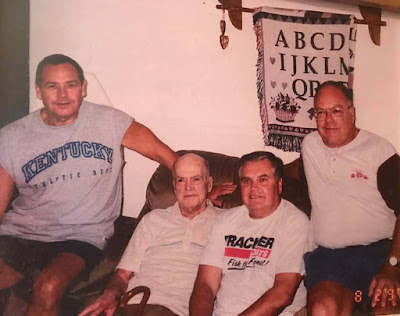 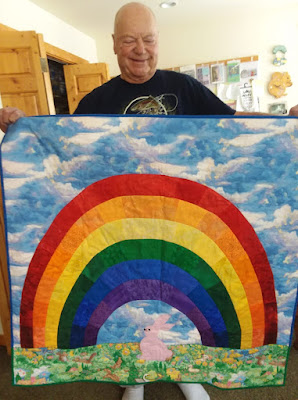 My father, Fred Duerr, holding up a baby quilt my mother made for the first great grandchild of a good friend.

The pictures above just amaze me.  The top picture is of my father, his brothers and my grandfather many years ago.  My grandfather passed away years ago and my Uncle Ronnie passed away within the past few years.  That only leaves my Uncle Gary, who is the youngest brother, and my father, who is the oldest brother.  The bottom picture is one taken within the past week of my father.  I did a double take when I first saw it...he looks exactly like his father, my grandfather, did!  My mother agrees!

This is the one of the many times we have seen how strong the family genes are and how they continue down through the family.  The artist Albrecht Duerer is one of our relatives and there is a picture of him that also made our jaws drop as one of my brothers looks just like him.  So many generations between them, and yet there is no mistaking that they are definitely related.  My mother looked just like her grandmother did as a child. I have a large picture of my Tutu (great grandmother) as a child and every time I look at it I see my mother.

We are seeing the same thing in our grandsons.  We can see the family genes coming through strong in Steven and Tate, who look like their daddies did at the same ages.  I can't wait to show Lauren the pictures of Josh as a baby and have her see what I am seeing!  I will get that chance tomorrow and I can't wait! 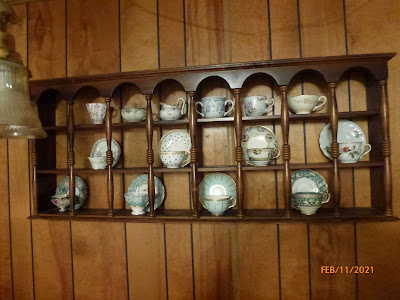 Well I finally got it done!  Jeff and I worked together to get the antique teacup display shelf up on the dining room wall.  My cousin Jeremy gave me display shelf saying that I should have it since it was made in Paris, Maine and we have strong family ties to that town and Maine in general.  When he first gave it to me I did not realize exactly what it's purpose was but quickly discovered it upon a closer inspection.  It is perfect because it finally allowed me to be able to safely display my grandmother's teacup collection.  The ones on the bottom and middle shelves (with the exception of the rose one at the right end of the second shelf) are all hers, as is the little creamer on the top shelf.  The rest are mine collected over the years because my eyes were just drawn to them.  I call this a frugal win since Jeremy gave me the shelf, I had the teacups and they bring me great joy!

Other frugal doings in no particular order:

~I made a nice lemon pasta chicken that fed us for 4 meals.

~I also made a old fashioned boiled dinner with potatoes, sausage, carrots and onions...lots of leftovers that will have corned beef added to make another 2 meals over the weekend.

~We sold the bunk beds to a lovely family that are going to be doing emergency placement foster care.

~Jeff ground up a bunch of bulk coffee beans that we had been given.

~Jeff had a doctor's appointment and they are trying a new medication for his sinus issues.  Luckily the little pharmacy across from the doctor's office had the medication he needed and it was just $10 so that saved him a 45 minute trip one way to Walmart.

~More loaves of bread were made. 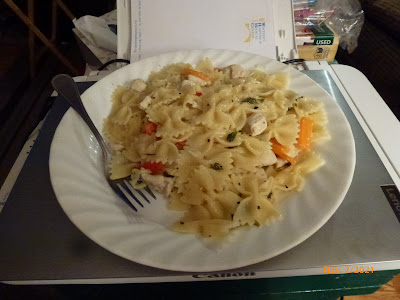 ~We got a bigger coffee maker out to use while Josh, Lauren and Tate are here this coming week.  We are all big coffee drinkers.

~I made a detailed shopping list so that I don't overspend and I don't forget anything.

~A menu plan was also figured out for the next 2 weeks since we will have lots of family here for meals.  Luckily I have the makings for homemade mac and cheese, lasagna, a ham dinner and a big turkey dinner all on hand.  I will use the leftover turkey for turkey pot pie and the ham for sandwiches and ham and scalloped potatoes.  I almost forgot, I also have everything here to make shoyu chicken and rice too!  YUM!

~I was able to consolidate all of my seeds for the garden into a large plastic container.  That will make them much easier to sort through and find this Spring.

~I've been having fun learning about the meanings of our family surnames and have learned some interesting things about our family's past .

Not much else going on in the frugal department.  We have been busy trying to get the house ready for the kids' visit.  I still need to get the guest room finished being set up and get the pack and play all cleaned and ready for Tate.  I have managed to get the kitchen floors and cabinets all scrubbed and just have the rest of the floors to do now along with the dusting and some decluttering.  Hopefully we can get to most of that this weekend.

Strange title for a blog post...but bear with me and it might actually make some sense...at least I hope so.   😉

I actually think this whole pandemic dragging on and on and on, along with the dysfunctional political climate is starting to drive me a bit batty.  Seriously!  I also think my husband would totally agree with me on this.  He is used to my random thoughts, fluctuating moods, and yes, even depression but this is a whole new ballgame.

So the other day I saw a trailer for the Godzilla vs King Kong movie.  Now, I grew up in Hawaii watching the old Godzilla movies where Godzilla battled with the bad monsters who were out to destroy Japan and the world. Godzilla was often misunderstood, but he tried to protect his territory from evil monsters even if the military did not understand that was his goal.  He really was a good guy! 😀  By the time I actually saw a King Kong movie, Godzilla had already won over my little girl heart.  Fast forward to this new movie trailer where, to my absolute horror, they were portraying my beloved Godzilla as the bad guy!  I kid you not, I got so upset!  Poor Jeff just looked at me while I ranted about how Godzilla was a good guy and just misunderstood and how it was totally unfair that they were portraying him this way.  I even ended up having nightmares about all this.  Yes, I did!  After much thought about this, I realized that I had somehow connected my feelings of unfairness about Godzilla being painted as a bad guy to what is going on in our country politically.  Think about it...police officers who risk their lives every day are being vilified by some of the highest ranking politicians in our country.  Even after an officer was killed during the riot on Capitol Hill, we have a certain member of the House of Representatives who tried to paint them in a bad light when they were trying to protect the same said member from being hurt.  She even accused them of possibly trying to send her into harm's way.  Her "story" is falling apart at the seams at the moment so who knows if she made the whole thing up or not BUT it still remains that she is trying to paint the brave Capitol police officers in a bad light even when one died of injuries, one committed suicide shortly after this and many others were hurt.  Yes, I am pissed off, one of my Josh's friends used to be a member of the Capitol police and my son knows many of the officers who are still a part of police force.

As for the country songs, well have you ever listened to the lyrics of some of them where they talk about just going out and enjoying the simple pleasures in life?  You know, a day out on the river or lake, singing around a bonfire, camping out under the moon with not a care in the world with your friends and family?  Yes, I miss those moments in life!  I miss going out on the boat with my parents in Montana (it's been more than a year since I have been able to see them in person and spend time with them) with the breeze blowing in our face while we explore the lake.  I miss going camping with my kids and grandkids, sitting around a campfire and roasting marshmallows and making S'mores.  I miss having the freedom to just jump in the car and go explore small towns without the fear of catching this horrible virus.  Most of all, I miss being able to just be with my friends and  family and share hugs with them.  I am a hugger and this is killing me not being able to do that.

Sadly I fear that this virus will remain with us for a long time with all the dangerous mutations that are happening with it.  Restrictions will remain in place for a long time.  Our political climate is getting even more divisive and it will destroy our country if we don't figure out a way to regain some common sense, human decency and start actually following the law and holding everyone to the same standards.  It seems to me right now it is a "I want my way no matter what the cost or harm it might cause" kind of thinking for many people.  What they either don't realize or maybe don't even care, is that they are destroying the country that our ancestors fought so hard for so that ALL of us could have the freedom to pursue our dreams, worship whomever we choose to, and not live in fear of someone coming to lock us up for simply sharing our thoughts.  We need there to be consequences for those who harm others, who steal, destroy property, loot and burn down buildings.  We need there to be consequences for those who lie to further their own agendas.  We need there to be equal standards for what is unacceptable about using racial, homophobic and other hateful and hurtful rhetoric no matter who says it!  Wrong is wrong.  Do I believe people have made mistakes in their past and can learn and grow from it?  Absolutely!  The key is actually learning, acknowledging, growing and changing their behavior.  We all make mistakes in life and hopefully we do learn from them.

So here is to Godzilla, who is misunderstood and really is a good guy, country songs, campfires, family, friends and common sense to once again come to pass.  May we all be able to hang on for a bit longer and once again be able to hug and gather with our loved ones, and not worry about being called every bad name ending in "ist" because we believe in everyone being treated with respect and dignity and also believe in common sense.