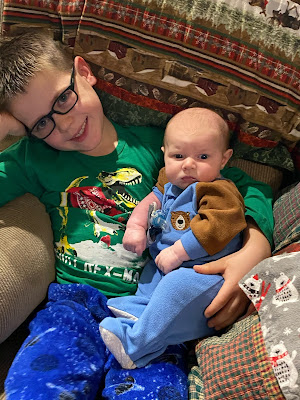 Happy 9th Birthday to our oldest grandson Bradley who started our journey in this next chapter of our lives!  We love you so very much and are so proud of you!

I am doing a big Frugal Friday Wrap up covering several weeks trying my best to remember things so please bear with me.  In no particular order... 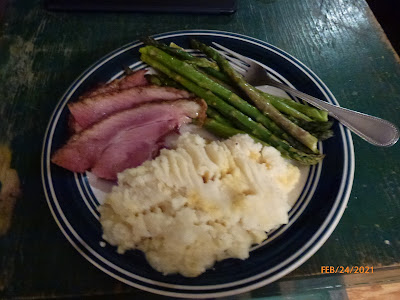 ~I cooked a large ham spiral sliced ham to feed our crew while Josh and Lauren were home with our newest grandson Tate.  That ham served us for multiple meals and I still was able to freeze two packages of ham slices and the bone (to make soup with later).

~I got lazy and bought 2 family sized frozen lasagnas along with 2 loaves of French bread.  I made garlic bread with butter and crushed garlic slathered on the French Bread and the lasagnas gave us 4 full meals feeding our huge gang and a dear friend multiple times.

~I sent Tate home with a very soft little hat that his uncle Jaysn had worn as a baby.

~We created a changing table on a set of drawers with a soft towel and a waterproof flannel pad.  I also set a kleenex box stuffed with plastic bags next to the changing table for the kids to put the dirty diapers in.  It worked out great! 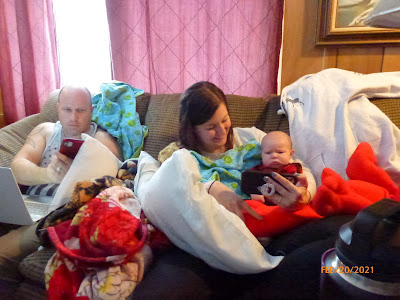 ~The kids bought diapers for Tate when they arrived (so they would not have to pack so many) and all they could find was the large boxes in his size.  They left us with half of the unused diapers and we will be giving those to a friend who is expecting a child soon.

~Bradley wanted to have a pizza party for his early birthday celebration.  I sent Heather home with a 5 pound bag of mozzarella cheese to use for those.  I also helped her make the homemade pizzas when we were there for the party.  Everyone brought something...I brought salad, Jeremy supplied the drinks and Jaysn and Rachel supplied the fruit for the ice cream sundaes.

~Heather brought over a pan full of her homemade huckleberry rolls...delicious!

~I made a large batch of both huckleberry and plain pancakes...we had lots of leftovers. 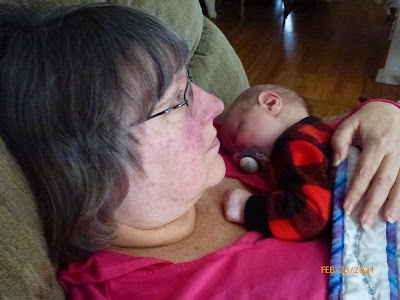 ~We played the game Relative Insanity with our crew and laughed until we cried...so much fun!

~I cooked up 4 boneless, skinless chicken breasts and froze them for future quick meals.

~I also cooked up a pot of chicken tortilla soup in the instant pot adding whatever sounded good to it...the lime juice just took it to a whole new level!  We had this for several meals and I varied it up near the end by adding some plain Greek yogurt to it to calm the "spiciness" down a bit.  I also added avocado chunks to mine...YUM! 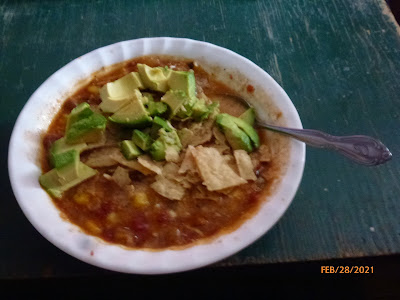 ~Josh requested Cranberry Orange bread while he was home.  Luckily I had bough and froze bags of fresh cranberries and had everything else on hand to make it.  I did a triple batch and made some for Chris, Heather and the big boys along with Jaysn, Rachel and Steven too.

~Jeff wanted banana bread so two loaves of that were also made later the next week.

~I found marked down turkey breast lunch meat on sale so I bought 3 packages at $1 each and froze them for future meals.

~More loaves of my homemade sandwich bread were made and Josh really appreciated having that again.  I did not realize how much he missed that since moving out after he graduated from high school.

~I finally got around to cutting Jeff's hair this week.  It was getting really "poofy". 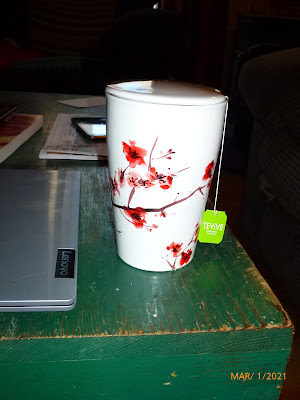 ~We found some things at the thrift store that we had been looking for...so happy when that happens.  They had the exact covered tea cup that I had been coveting and I got it for .99 there instead of the $20 that was the retail price online.

~We also hit up the clothing clearance sale at Walmart.  I got new jammies for the grandboys here for $1 a pair, a shirt for Steven for $1 and several shirts for me for $1.

~Steven fell in love with one of my big stuffed animal dogs so I asked him if he would like to take it home with him.  His little eyes lit up and he said yes!  He happily played with it the rest of the time he was here and hugged it all the way home. :)  I am so glad it made him his heart soar!

~I found a box of Belgium waffle mix on clearance and will be making up the entire box and freezing most of the waffles for future meals.  We can just warm them up in our toaster oven when needed. 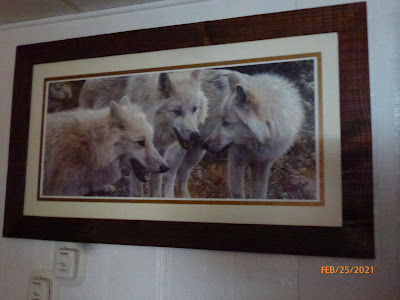 ~Jeff and I took the wolf print that Jeremy gave me years ago to get it professionally matted.  The guy there gave us a 50% discount since business has been so slow.  He also gave us the wire hanger stuff to put on the frame for free.  Jeff already had made the frame and had the glass cut for it.  It is now hanging up in our living room where we are greatly enjoying it.  It was still not cheap to do at all, but it is a numbered original print and we decided this would be our anniversary present to each other.

~We have been finding some amazing deals lately at the Grocery Outlet.  With covid cases on the rise here, we have been stocking up once again knowing that we are going to have to avoid going into town to do any shopping as much as possible. 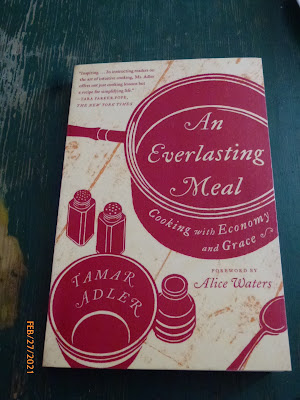 ~I have been greatly enjoying reading the book "An Everlasting Meal: Cooking with Economy and Grace" by Tamar Adler.  I found it at one of my local thrift stores for .98 .

~I was down to 2 pairs of black socks so I finally broke down and bought two 6 packs of them.  I don't like them too thick and these are all the right thickness and weight for me.  I won't have to buy any more for years and years to come!

~I sent Lauren home with some homemade herb salts that I made and also some vanilla beans from my sister's garden so Lauren can make her own vanilla extract.  I had already given some to Rachel and Heather, so now all my girls have some from their Auntie Leonie's garden.

~Our big vacuum finally died (it was free to us) so I did my research and found a good Bissel vacuum for a great price at Walmart.  I was shocked to see how much junk it got out of our carpets!  I'm not sure if I should be thrilled at it's power or mortified at how much dirt was in those carpets!

~By using free online genealogy searches along with DNA info from Ancestery.com for my hubby, I was able to narrow things down down and finally solve a hidden family secret/mystery.  It took me months to find all the info, but I did it!  My hubby now knows the truth about his ancestry, which is valuable information for him and our children going forward. 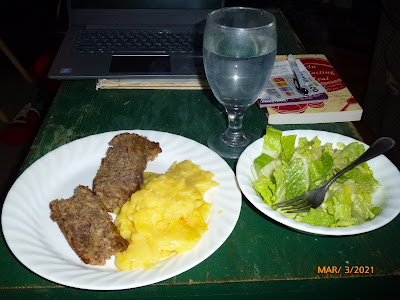 ~In need of comfort food, I made a nice meatloaf, scalloped potato and salad dinner for Jeff and I.  We had everything we needed here on hand.

~I had a little bit of leftover chow mien and decided to stretch it to make a meal for myself.  I cute up a huge Napa cabbage leaf into small thin strips, added half a thinly cut up zucchini, 4 fully cooked large frozen shrimp and made a sauce from a dash of soy sauce and about a teaspoon of sweet chili sauce.  It all got mixed together and cooked in the microwave for about 4 minutes.  I then chopped the shrimp up into smaller pieces so I could get some in most bites.  It was delicious and filled my hungry tummy leaving me very satisfied. 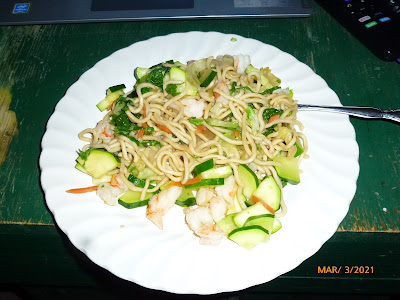 ~As per usual, I watched some of my favorite shows online.

~I found sliced roast beef and hoagie rolls marked down at Walmart.  I used them to make French Dip sandwiches.  I was able to make these for $3.50 total for both of us, including the au jus.  Last week I paid $11.00 for just one of these sandwiches and some onion rings when we went out to eat. 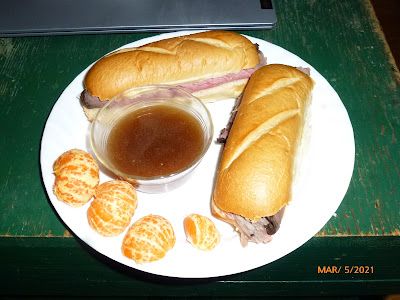 ~Broccoli was marked down so I bought a bag and used it to make broccoli cheese soup since 2 pound blocks of Cheddar cheese were also on sale for $4.99 each.

~I stocked up on yogurts at .39 each, cereal for .99 a box after sale and additional coupons, creamers (you can freeze these) and Powerade at .49 each.  These are all items we use on a regular basis.  I know I could have done better just buying the big containers of yogurt, but this way I got a lot of variety, which I love and consider these a wonderful treat!

~The plunger/locking part of our front door lock quit working.  Jeff replaced the whole thing and just had it re keyed with our original keys so that we did not have to buy all new keys for our kids and one of my best friends.  Much cheaper!

Not a whole lot going on around here now that the kids have gone home.  We are just puttering and doing smaller projects around the house since the weather has once again turned cold and gray.