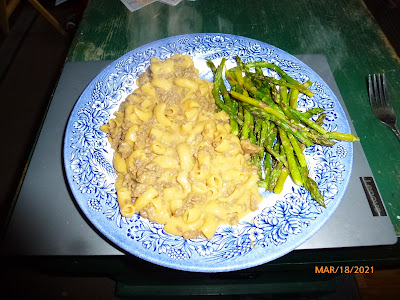 😉  It is Saturday right now as I am finishing off this post and the weather outside is crazy.  It is sunny one minute and then snowing and blowing the next.  Yesterday it reached 68 F.  Mother Nature is definitely in Menopause. Not too many exciting or earth shattering things to report over the past week...mostly just the usual.  It is the usual though that really does end up saving us the most though isn't it.  By trying our best to just do the little things on a regular basis, it does end up saving us money in the long run.  Onto the savings...

~Jeff and I worked out in the garden and cleared out the back flower beds.  Jeff also cleared out the side garden so it is ready for him to build raised beds in soon and he tackled the very overgrown and messy raspberry patch.

~He ran all of the dead raspberry canes out to the town's composting area.

~Leftovers for most of the weekend's meals...really good so no one is complaining.

~We stayed home so no money spent on gas, food out or shopping.

~I watched a bunch of videos on Youtube that we just plain fun!

~The weather started to turn Sunday afternoon with a very cold front coming in which sent me into a massive fibro flare.  Luckily I had the guest bedroom to retreat to where it is very cool and quiet.  I took a 5 hour nap!  Yes, it totally screwed me up for sleep later but I just could not function any longer.  I have made that bed as comfortable as possible and find myself retreating there more and more so that I do not disturb Jeff's sleep.

~Cold and yucky day outside and I felt it way down into my bones.  Back to the guest room for another nap it was.  I did not even bother to get dressed for the day....just stayed in my jammies.  I'm calling this a frugal thing because it made of less laundry generated.  That is my justification...LOL!

~Since I was not feeling up to cooking per say, I got a frozen pizza out of the freezer and cooked that up for dinner.  We had homemade applesauce with it.

~I found some good movies on YouTube that are based in England that I have been enjoying.

~Jeff and I ran into town to do a price check on how much it would cost to get bulk gravel and topsoil delivered to our home.  While we were there, I picked up some potting soil that was on sale so I can start my seedlings of the colder weather crops.

~Our sweet neighbor gave us some fun pop up play tents for the grandkids.

~Jeff and I called Rachel to see if she and Steven were home this afternoon.  They were so we headed over for a nice visit and went to the park next to their house.  Steven was thrilled to have G-pa as his personal playmate. 😊  Jaysn came home right before we left so we got a short visit in with him too. It was so nice to be able to just enjoy a nice afternoon in the sun with family.  It just made my heart smile!

~We picked up dinner from Panda Express and used a coupon for a free extra entre.  I still have half of my meal left and will have it within the next day or two.

~We also went to Winco and picked up a few things we needed there...a very few.  Our pantry, freezers and refrigerator are packed so all we needed was some fresh fruit, a few rice mixes that were on sale (for those days when I really am having a rough time), some plain Greek yogurt, soda for Jeff and some "adult beverages" (ahem) for me.  Those beverages will last a long time in this house.

~I uninstalled some old antivirus programs and installed a newer free one that I have used in the past and like better.

~My hanai sister Shannon and I had a great visit in the evening over the back yard fence.  I am so glad the weather is getting better so we can do that again.

~Our stimulus check came in and we used some of it to pay off our property taxes for this year.  The rest was banked.

~It was a lovely warm day so I took advantage of that to once again open up the sliding glass door to the back covered porch and aired out the house while the cats enjoyed the freedom to come in and out as they pleased.

~I made a big salad for dinner with a Buffalo Ranch salad mix that I added some canned chicken breast meat to.

~Lunch was leftovers and/or sandwiches.

~Jeff worked on the cherry tree, getting it trimmed up.

~I went through the refrigerator and planned our meals for the next few days based on what needed to be used up ASAP.

~I worked on my points programs.

~We facetimed with Josh while he was on his way to Kickball.

~Jeff got the back screened in porch cleaned off and got out my table and chairs for there.

~I had some Sweet Italian Sausage, kale and potatoes that needed to be used so I made a huge pot of Zuppa Toscana soup.

~Jeff headed into work early since he has to do his route and that of another driver (who had a family emergency).  I decided to watch a movie on YouTube since I had slept for half of the day since I was unable to sleep during the previous night.  Yes, it was another one of my "disaster movies"...I have no idea why I love them so much but I do. We don't have anything big planned for this weekend with the weather being so crazy.  I think I will try to get Jeff to help me move some pictures around on walls, reorganize the pantry (it got a little messy in there again with all the fibro flares I have had and not being able to keep up on it) and do w bunch of laundry.  Jeff also wants to try out the guest bed this weekend and see if it helps his back.  If it does, we will be moving the guest bed to our bedroom and putting our current bed in the guest bedroom.  We shall see what he thinks and what helps his back the most.  Have a great weekend!

Email ThisBlogThis!Share to TwitterShare to FacebookShare to Pinterest
Labels: frugal friday wrap up