Snow, Some Shopping and Preparing for Shortages 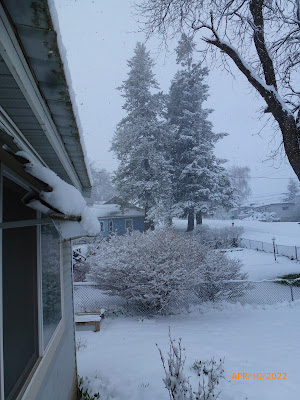 As I sit here typing out this post we have round 2 of our Spring snow storms.  This round is much lighter than Sunday's, which dumped about 4 inches of snow and weighed down my daffodils to the ground.  I had told Jeff that we would be getting more snow as he worked in the yard on Saturday leveling out an area to build a small greenhouse for me.  I really want to be able to start as many seeds as I can to save money on starts and also provide more food from our garden.  Saturday was a blustery but sunny day and I found every excuse I could to be outside as much as possible. 😉 Sunday found us in the house watching movies, me giving Jeff a much needed haircut, him cleaning out the back bedroom so I could once again sleep in there on nights that he, or I, was restless or having a rough time sleeping.  I was so tired that day that I slept through his cleaning.  I curled up on our bed in our room and apparently was out for the count. 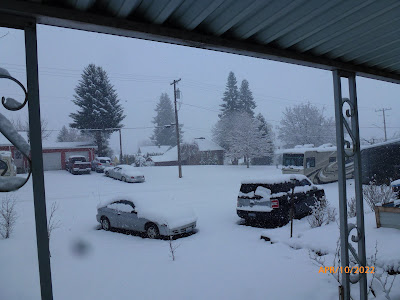 Since we did not want to have to go anywhere over the weekend, we did our shopping on Friday night.  I had gotten a  phone call earlier in the day from Walmart saying that they wanted to know if I wanted to participate in a auto refill programs where they would consolidate my pick up days on my meds instead of me having to make multiple trips.  Looking at when my refills were due, I could just have to make 2 trips this month.  Sounded good to me!  After I hung up with them I got to thinking that this program may also be so they knew how much medications they were going to need in advance for their regular customers.  I know that there are shortages on some medications and there have been times when they have had to order in more of one of my medications because they did not have enough of it on hand.  I asked my neighbor, who works at a hospital about this and she confirmed that it was most likely what was going on.  So off we went to Walmart once Jeff got home. 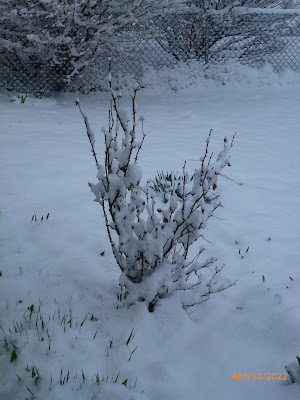 On the way into Walmart, I floated an idea to Jeff about getting an electric long reaching tree trimmer.  They had them on sale at Harbor Freight and it would make Jeff's life so much easier and I would not have to worry about him as much.  He quickly agreed!  I told him that would be our "gift" to each other for past birthdays and our anniversary, along with Mother's Day for me.  This will cut down on the time he has to put into pruning all our fruit trees each year and our kids can also borrow it to do theirs as well. 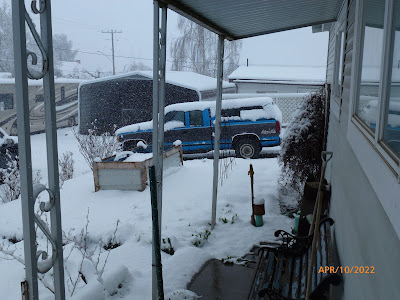 Along with Walmart and Harbor Freight, we also stopped at Safeway and Grocery Outlet.  I had uploaded digital coupons onto my Safeway card for milk, pizzas, and a case of water.  I found some marked down pork in the reduced section and grabbed that quickly and added it to my cart.  My biggest score though was found in the bakery.  There was a worker in there and I asked if they had any food grade buckets that I could have.  He said they had a lot of them and asked how many I wanted.  I told him I would take them all!  He filled a large shopping cart up with them and the lids and sent me on my merry way with all those lovely FREE food grade buckets!  I had already filled up the last 6 I had picked up from there previously and needed more.  These will be used for more long term food storage, homemade laundry detergent, some for gardening and some to share with my girls.  SCORE!!!!  I only found a few items at Grocery Outlet, mostly snacks for Jeff, but overall, I did not spend much at any of the grocery stores since I am pretty well stocked on most items and am trying to be really careful with money right now since we ended up owing on both Federal and Idaho taxes, so I had to get those sent off earlier in the day. 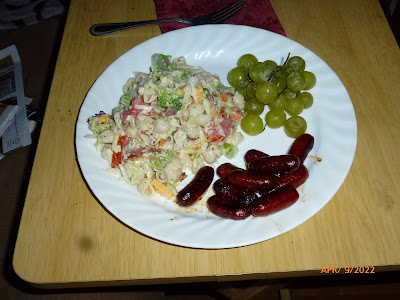 Our weekend meals were simple and frugal to boot.  I had thawed out some homemade Zuppa Toscana for dinner on Friday and got that heated up while Jeff took a shower after we got back from our shopping trip.  Saturday I cooked up a Bacon and Ranch Suddenly Salad kit and added cheddar cheese, some leftover bacon, half of a bag of coleslaw mix and a diced up Roma tomato.  I served it with some Little Smokies sausages, and a cut up apple for Jeff and some grapes for me.  Jeff made up some brownies later that evening and they were so good!  You can never go wrong with chocolate brownies, am I right?  Sunday night we just threw a pizza in the oven and had that for dinner.  Easy Peasy and yummy!

Today I am playing "catch up" and trying my best to make the most of what we have here.  Earlier I got 2 loaves of bread mixed up and kneaded and then set them on top of the pellet stove to rise, which they did beautifully!  While those were baking, I cut up the last of the bread from the previous week and got those ready to pop in the oven.  I love making homemade croutons.  They are great on salads, as toppers for soups, and just to snack on.  Two loads of laundry are now finished and ready to be folded.  I put away a bunch of cases of water and consolidated them into one spot.  My next project of the day is going to be organizing my sewing supplies and trying to get most if that in one spot also.  At this point in my life, I really crave organization so that I know what I have and can find it easily.  This saves me so much time and money, so that I don't buy things that I already have on hand and don't need more of.  For example, I have enough white thread to last me for years!  No need to buy any more of that.  I am however in need of replacement needles for my sewing machine because I don't have any on hand if I break the one that is on my machine now.

I suppose I should get off the computer and get working on that last project.  I'm still trying to decide what to do for dinner.  I may just go with cheese tortellini and pesto sauce, along with some fresh fruit.  That does sound good.  Okay, that will be the plan.  Be blessed!