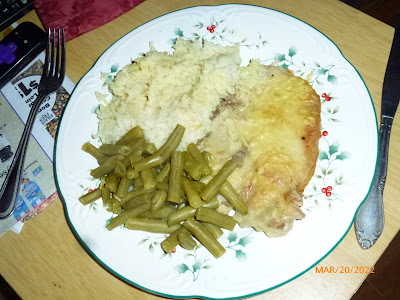 Hello friends. 😊  We had a busy week and weekend, so this post is late again (as usual).  I have been pushing myself way too hard and it has started to catch up with me.  I can't help it, I feel this urgency to get so much done.  I had my pantry to redo and organize, found some huge gaps that needed to be filled, there was, and still is, lots of gardening work to be done, and we had Steven with us one day during the week.  Steven was a HUGE help with the pantry stuff since he could "ferry things from G-pa to Grammie. 😉 That alone helped save my back and legs!  Now onto the frugal doings!...

~Jeff and I stayed home and just relaxed.  We watched a few movies and got a much needed rest.

~I made pancakes for breakfast and we refrigerated the leftovers.

~Jeff started work on the shelving for our front bedroom turned pantry.  We needed more space in there to store not only food, but also linens and gifts.

~I made a nice pork steak and rice casserole with some pork steaks I had gotten on half price and then froze.  I served it with green beans.

~I had a leftover pancake for lunch.

~While Jeff was at work, I did laundry and also worked on organizing the pantry with one of the new sets of shelves.

~Josh called to let me know that their next base will be in Utah!  I am so excited because we can drive there within about 9-10 hours.  That means even more family time for all of us!

~Steven came to spend the day with us since he has a double ear infection and needed another day to rest more than he would at daycare.  He is on antibiotics and was already starting to feel much better.  He was a wonderful helper and helped us get so much done on the pantry project with helping Gpa build a second set of shelves and then helping us get them organized and filled up.  We could not have done as much as we did without his help.😀

~I made a list of things that we are low on, like Saltine crackers, and Jeff will be picking those up on Thursday.

~I made Steven macaroni and cheese for lunch and he also had grapes and popcorn as a snack.

~I made two loaves of bread, with Steven's help of course. Jeff and I had a ham sandwich for lunch,

~Dinner was leftovers since we were both exhausted.

~Chris managed to find the ammo for Jeff's gun in Montana, so he picked him up some.  If we make a trip over there this Spring of Fall, we will try to pick up more then also.

~I was still really tired and sore, even after going to bed early last night.  It triggered my IBS, so I figured my best course of action was to try to do some less strenuous tasks today and also take some medicine to help.

~I did several loads of laundry and hung the sheets out to dry on the laundry line since it was in the low 60's today.

~With the weather being so nice, I got out in the garden and did some more cleaning out of the garden beds.  I also noticed that my radishes are starting to come up...Yay!!!!

~The back glass door that leads out onto the screened in porch was opened wide to air out the house.  The cats loved being able to come in and out as they pleased.

~I have been trying to make more "pantry meals" with canned and packaged goods, as well as trying to make more room in my freezer and making sure I use up bits and bobs of things.  Tonight I used a Velveeta Broccoli and Rotini boxed meal and added about 1 cups of leftover dried noodles from a different meal, some frozen broccoli and a small can of chicken to it.  I also thinned the cheese sauce with a little of the saved pasta water.  It made for a tasty and frugal meals since I had gotten the boxed meal for .99 at the Grocery Outlet store. This is a meal that I can recreate without the packaged mix also using items I have on hand.  We had enough for 3 large servings, so Jeff took the 3rd serving for his lunch at work on Thursday.

~Sometimes you just need something sweet so I made some flourless peanut butter and chocolate chip cookies.  I used a small container of peanut butter that Jeff and I were not fond of the taste of (Trader Joes brand) that had been given to us.  It did make for good cookies though.  Again, I am trying to figure out things to make with things from the pantry and without things that may be in short supply in the near future, like flour.

~I spent the good majority of the day working on the pantry and have most of it organized now.  I just have a few more things to get done on this huge projects.

~My spinach is starting to come up in the garden!

~Uncle Bob was up at his house today so I was able to have a nice visit with him.

~I rewarded myself with a frozen pizza that I popped in the oven to cook for dinner since I was really wiped out by the evening.

~I got 2 packages of mixed veggies going in the dehydrator.

~Have you ever got a bad feeling?  Well I did today so I locked up our garage to make sure no one could get into it without a key.

~I went down to our food giveaway near the end of it because I wanted to try to organize a diaper and formula drive for them.  I know that so many families are hurting right now and with the increasing cost of everything and the shortages on things, I thought this might be something that could really help out our community.  One of the ladies there, who is really bossy, could not shoo me out of there quick enough and would not even let me present my idea to her or to anyone else.  She questioned where I was from, even though she has seen me in town for years, and told me they had all the connections they needed and herded me to the door.  I have to tell you, that left an awful taste in my mouth and is NOT the way that anyone should be treated.  She acted all high and mighty and like I was someone who was way beneath her.  BTW, I was not there to get any food and it was still during the time period that they should have been staying open, but they were already taking things down and many people were just standing around talking that help out there.

~I packaged up the mixed frozen veggies that I dehydrated.  Two pounds pre dehydrating took up very little room in a canning jar after they were done.  I will be doing more of these!  I want to have lots of dehydrated food on hand for the future.  After seeing how wiped out shelves, freezers and coolers were at Walmart when we were there earlier in the week, I am very worried about what is to come.

~I decided to head into town to do some topping off of things that I was either low on or missing in my pantry.  I called Jeff and asked him to meet me at Winco after he got off work because I would need his help lifting things.

~My first stop was the Dollar Tree where I stocked up on coconut milk (I thought this would be a good shelf stable substitute for creamer), a new plunger for use along with a bucket to wash clothing with if we did not have power, some more shampoo, some early learning books for Steven and I to work on this Summer, big aluminum baking pans with raise plastic lids to use as seed starting trays and some canned potatoes.

~I next went to Walmart to price out steer manure and compost.  All of the steer manure had been bought out right after they unloaded it apparently.  It's ok though, that worked out in my favor because I realized I have a free source of well rotted horse manure from Heather's parents.

~Last stop was Winco.  They were completely out of the 50 pound bags of unbleached flour.  They were also out of all the other things that come in the 50 pound bags like rice, oats, sugar, beans, etc..  I picked up more canned meats, Powerade, frozen veggies, a cooked chicken from the deli, bananas for Jeff, pickles, soda for Jeff, canned pears and canned veggies.

~As soon as we got home, I got some Yukon Gold potatoes washed, cut up and boiling.  I made them into mashed potatoes and we had that, along with some of the chicken, for dinner.

~I opened two 2 pound bags of mixed frozen veggies and got them going in the dehydrator overnight.

~We watched a few episodes of one of the old Survivor series that we had not seen before. 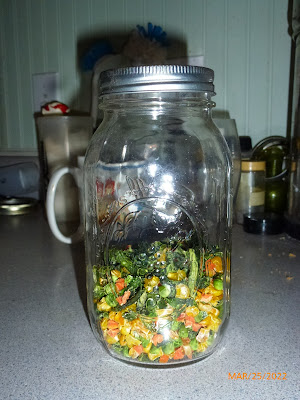 Jeff and I continue to make plans for a greenhouse and are gathering up materials for it.  I found the perfect spot for it and hope that we can build it next weekend since Jeff will have 2 days in a row off then.  I really need to get seeds started that I can then transplant out into the garden once all danger of frost has passed in our area.  More than ever, I feel a need to plant as much as I can.  Anyone else feeling this way also?