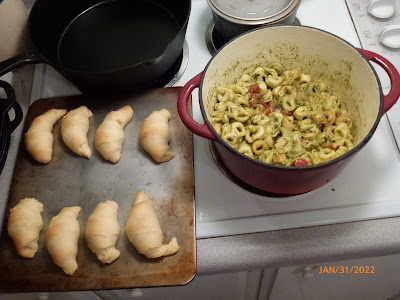 ~Jeff's boss bought pizza for the whole Saturday crew, which was really sweet of her.  She sent leftovers home with Jeff for me, also very sweet.

~I made a green bean, chicken and stuffing casserole for dinner.  Just think of green bean casserole on steroids with a stuffing topper.

~Jeff and I finished the green bean casserole for lunch.

~Jeff worked on some projects around the house and I worked on getting laundry done.

~We had ham salad sandwiches for dinner.

~We have had some rather large medical bills finally come in and they need to be paid ASAP, so we made a plan to tighten the budget even more.

~I got some fish out to thaw for dinner on Monday. 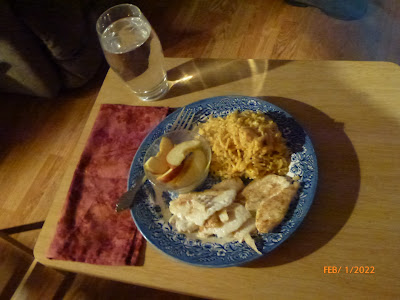 ~I was having a rough day, so the fish did not get made.  I did however make a tortellini (bought in bulk previously), red pepper (bought on sale and then chopped up and frozen) and pesto (bought at the Dollar Tree previously) dish and served some crescent rolls (found on sale at Walmart after the holidays because they had bought too much) with it.  There were enough leftovers for my lunch Tuesday.

~My cousin Tim, from my Dad's side of the family, and I had a nice visit via Facebook messenger.  It has been way too long since we have been able to do that.

~One of my friends, who is also Jeff's coworker, has covid-19 and she was not feeling well at all today.  I urged her to go to the doctor before things got worse or she may end up in the hospital.  Well it turns out that she has pneumonia. My heart just hurts for her.  At least they caught it before it got any worse.  I'm so glad I was able to convince her to go and get checked.  It may not have saved me any money, but it sure did her!

~ Another one of Jeff's coworkers also just tested positive for covid, along with the wife of another one of his coworkers.  I am really praying that he does not get it and bring it home to me.  So far, he seems fine, but just in case, I made a grocery list for him to pick up at the store tomorrow in case we are home sick. Unless he is showing symptoms, he is still able to work.

~Jeff was able to find kitty litter at Walmart today.  We use the Special Kitty brand and it has been out of stock a lot lately.  They must have just got a truck in and stocked the shelves because Jeff said there was a lot of that brand, but very little of any other brand.  Jeff picked up 2 boxes so that we have it here and that should last us at least 1 1/2 months with what we already have. 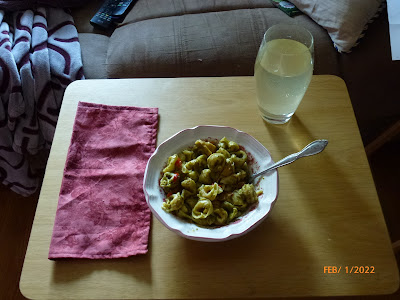 ~I baked 2 loaves of sandwich bread. I had set the bread pans on top of the pellet stove to rise.

~After the bread came out, I put in a pan of acorn squash to cook. I have a small oven so I had to do this is separate batches.

~All the fruit and veggie scraps, along with eggshells went into the compost pile.

~Leftovers were for lunch for me and took some sandwiches.

~Jeff picked up the groceries on the grocery list that I sent with him.  He only added one item to it, but it was something that he uses on a regular basis and I did not realize that he was running low on it.

~I went "shopping" in my upright freezer and got butter, smoked sausage and corn out.  While in there, I found some more pulled pork and lots of frozen veggies.  I think I may try to dehydrate some of the veggies tomorrow to free up more room in the freezer and to save the veggies from possibly getting freezer burn.

~Dinner was the smoked sausage (cut up and seared), potatoes, onions and cabbage all cooked up to make a large and chunky "hash".  We had corn as the side dish. 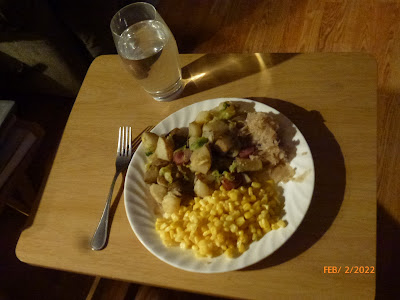 ~Jeff took the leftover "hash" for lunch, along with a sandwich to have for his dinner.  He has his bowling league tonight so he needed to take dinner with him.

~I trimmed my bangs again.  I really would like to do a full haircut, but I need Jeff's help with that and we have not found the time to do it yet.

~I popped up some popcorn and watched a show on YouTube.

~My plan was to go into town this morning and do a bit of shopping but Jeff took my car since his had a flat tire. Hopefully the tire can be fixed. I did save money by not going shopping though. 😜

~Jeff and I save our coffee grounds to use on acid loving plants.  Today I dumped a week's worth of grounds on my hydrangea bush in the back yard.

~Comfort food was needed, so I boiled up some cheese tortellini.  For the sauce, I used olive oil, some cherry tomatoes that were frozen, a salt free seasoning, dried parsley from our garden, a few big grinds of pepper and a dash of sea salt and simmered all that together.  I added the tortellini and mixed it in.  YUMMY!

~Jeff took me into town to do some shopping.  Dollar Tree in Pullman is up to $1.25 now, except for their seeds, which are still 4/$1.  I got some food storage bags, some magnetic clips for the refrigerator, and a few other items.

~We found bananas at 25 cents a pound at Walmart!  Both of us were shocked and we bought 2 bunches.  We picked up some discounted doughnuts too. Lastly, we bought more Powerade for me.

~Dissmores had the huge canisters of their cheese ball snacks discounted for $1!  I bought a canister.

~Dinner was pizzas that we had boughten on sale previously and frozen. 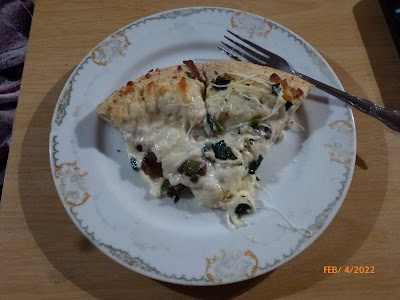