Snow and Soup Kind of Day 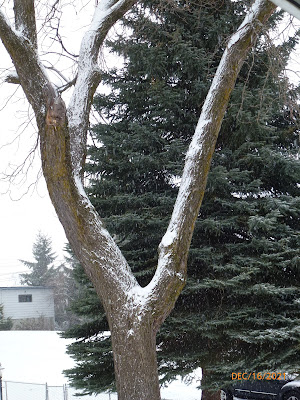 The snow is gently falling outside and starting to cover everything.  There is something so magical about snow falling around Christmas isn't there?  I have Christmas music playing softly in the background which just adds to the whole Winter wonderland and holiday mood.  The snow is expected to keep coming on and off through Christmas too!  I can't wait for my oldest two grandboys, Bradley and Isaiah, to be here this weekend and to help me build a snowman in the front yard.  We are also supposed to head down to the valley on Sunday evening and go to Clarkston, WA for a company Christmas party.  I think we will go the Idaho route for that one to get there since Idaho is much better at keeping their highways maintained during snowy times than Washington state is. Anyway, I am getting off topic again...it's one of those days. 😉

Snowy weather is equated with hot homemade soup in my mind so I have the rest of the chicken that I had bought at Winco simmering away making a nice chicken broth at the moment.  I will strip the rest of the meat off the bones and add that to the broth, along with some veggies, garlic and noodles, to make a delicious and warming soup.  Jeff and I love homemade chicken noodle soup.  It was not something that he had growing up, they always had canned soups, so he was pretty amazed when he tasted real homemade chicken noodle soup the first time I made it eons ago.  It was something I grew up eating because my mother was, and still is, the queen of making things stretch and not wasting food.  I learned so many important lessons from her while growing up and it is just second nature to me now to throw together all kinds of soups based on what we have handy in our home and what needs to be used up ASAP.  Thank you Mom for imparting your wisdom onto me.

Tonight we are expecting the temperatures to drop down to 16F.  I'm thinking I may need to add another blanket onto our bed and the guest bed too.  I never know which of the two beds I will end up in.  Last night I slept in our bed and poor Jeff was really restless waking up almost every hour after midnight.  I'm sure he is exhausted today.  I was able to sleep for a long stretch after he left for work and finally got up at 11 a.m..  That is really late in the day for me to get up, but it still only gave me 6 hours of good sleep.  If it is not windy tonight, I may opt for the guest bed if Jeff is having another rough night.  I don't like to sleep in the guest bedroom if the wind is blowing because the front awning makes noises that keep me awake.  Before anyone thinks that there is "trouble in my marriage" because I sometimes sleep in the guest bedroom, I can assure you that we are fine.  It is just that some nights either one of us can be really restless and toss and turn for the majority of the night keeping the other from getting good sleep.  Patchy cat loves the nights that I sleep in the guest bedroom because she joins me in there and cuddles up to sleep.  Midgy's domain is our bedroom and bed, so it is rare that Patchy will come up there unless it is a really cold night and both Jeff and I are sleeping in there.  Then she will risk the wrath of her sister to come snuggle up next to me while Midgy remains near Jeff's feet.  There has been more than one occasion where a cat fight has taken place over the top of Jeff and I when they have decided to go at it.  UGGGG!

I want to end this post by saying that my heart aches for and goes out to all those who lost loved ones, their homes and businesses in this awful weather that has been hitting our nation here in the USA.  I have friends who have had damage to their homes also.  My love and prayers are with them all.