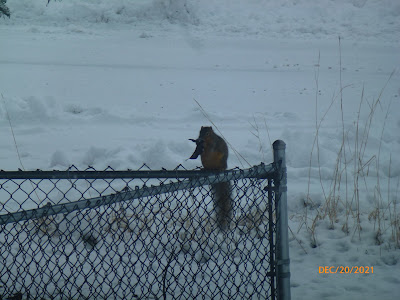 Here it is Christmas Eve and we are settled in as the snow softly falls outside.  Meanwhile, In Oregon, my cousin is hunkered down as he awaits a huge snow squall bringing up to 10 inches to his front door.  I'm glad we are here, even if we are going to be getting down into the single digits and below in the coming weeks.  I'm very much looking forward to spending time with friends and family both this weekend and this coming week.  Now onto the saving:

*I'm including the the first 4 things we did Friday night into the weekend thread because I had already posted my last FFWU post before we headed into town after Jeff got home Friday night:

~Jeff and I went out to dinner and I brought half of my dinner home since I could not eat it all.

~We went to Target and used gift cards to buy the following: 2 candles (gifts for loved ones), 2 bottles of maximum strength store brand Musinex (We needed to have this on hand in case we end up sick with anything upper respiratory. Omicron variant is hitting our state hard right now.), and 2 boxes of Angel Food cake mix.

~We went to Old Navy to browse their clearance racks and found 3 shirts for a total of $2.03.  You can't beat that price!

~Winco was our last stop of the night to pick up a few needed items.  While there I found some of my favorite Krab salad marked down (sell by date Dec. 20th) so I picked some of that up as well, along with a Dutch apple pie that I baked as soon as we got home.  With grain and wheat shortages being reported and the cost of fertilizer going through the roof, I know that some farmers are not going to be able to afford to plant all their crops this coming year.  Therefore I bought another 50 pound bag of unbleached flour to have on hand.  I go through a lot of flour and I wanted to get it before the prices go even higher.

*Now back to the actual weekend doings:

~Our two oldest grandboys, Bradley and Isaiah, came to spend the night.  They came bearing a gift of cherry chip cinnamon rolls from their mom.  YUM!

~We worked on a puzzle that I got at Goodwill, they hot tubbed with G-pa and we watched a movie on Disney + before they headed to bed.

~Sunday morning found G-pa making the boys pancakes while Grammie slept in.  We got about 4 1/2 inches of snow overnight and it was so heavy and wet that I feared we might lose power.  Chris told us that only one lane of the road was plowed coming out to our town.  Apparently we only have 2 snowplow drivers now for our county.  It is going to be a bad winter for driving.

~The boys had so much fun wrapping their gifts and writing notes to their parents. :)  I had bought gifts for all the boys here to give to their parents...it is something that thrills them to bits to be able to do.

~Jeff's disk in his lower back swelled up and put him in a lot of pain.  I had him get himself set up on the couch and watch bowling since it is the only way I know to help him take his mind off the pain.

~We skipped Jeff's company Christmas party since the roads in our county are not good.  I took a nap instead while Jeff rested his back.

~In the evening, we watched an Andy Williams Christmas Special from 1966.  It brought back so may memories for both Jeff and I since it was a tradition in both our households growing up to watch these each year. 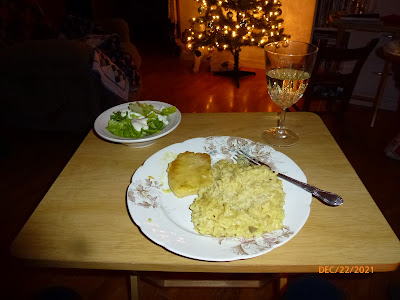 ~Woke up to snow, snow and more snow!  My entertainment for the morning was watching the squirrels gather and eat the seeds from the pods that fell out of the big tree out front.  I think I get a bigger kick out of watching them than my cats do.

~I had Jeff drop off some movies at the library on his way out of town this morning.  I don't like to drive in the snow and I am afraid of slipping on the ice under the snow if I had to walk down the steep hill to get to the library.

~My neighbor needed a can of diced tomatoes and luckily I had some on hand that she could have.

~In need of a comforting meal on a snowy day, I made colcannon with kielbasa.  It is not something I had made before but it sure sounded good so I went ahead and tried it. It turned out great! 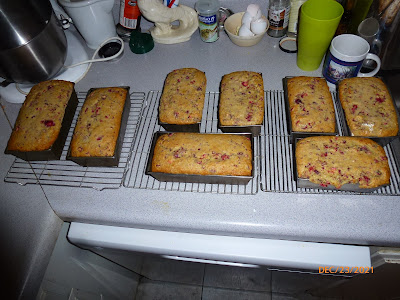 ~I woke up with lots of pain in my knees.  My inner barometer is telling me that a new storm system is coming in.  I don't even need to check the weather forecast online.

~I called Walmart about my prescription to see if it was ready.  We went over my other prescriptions and found that I can refill one of my others now as well so that I don't have to make another trip in later in the week.  Jeff is going to make the loop and swing through Pullman on his way home tonight to pick them up.  This will save us on time and gas.

~I decided against making all the candy this year for Christmas.  The only thing my kids and my sweet hanai family members keep asking for is the cranberry orange bread, so that is going to be what I make for gifts.

~We had leftovers for dinner.

~Josh sent us a video of our littlest grandson, who just turned 1 a week ago, walking!  That boy just took off and kept on going!  We video chatted with them all later in the evening and got to see our silly little boy enjoying bath time and being his goofball self.  He recognizes us via video chat and smiles and waves to us.  This just made our evening! 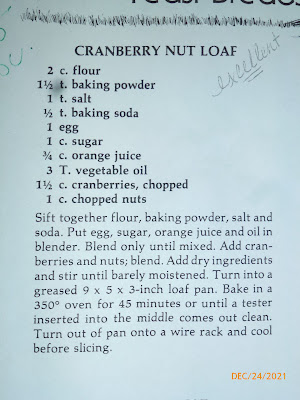 ~Since the roads were clear from snow and ice today, I decided to chance it and take a drive so I do not go stir crazy before the super bad and cold weather keeps me locked in the house for weeks on end.

~First stop was the library where I picked up 2 books and a movie, "The Last Champion", that was partially filmed in our little town.  I can't wait to settle in with Jeff and watch it.  I'm thinking Christmas Eve night would be the perfect time to do so.

~Next, I headed into Pullman, WA and stopped at Walmart.  I picked up some reduced priced and some hard to find items (who knew that canned tamales would be impossible to find for over a year, but I got some today.  I also found a food container set for $5 in the clearance section that I added to my gift stash.

~The Grocery Outlet did not let me down.  I found lots of marked down meats there also and froze most of them.  I picked up some treat type items also, because everybody needs treats. 😃

~I took the package of beautiful boneless pork chops that I found at the Grocery Outlet and made my rice and pork chop baked casserole for dinner.  We had a salad with this.  The pork chops cost me a little over $2 on sale and I had everything else I needed for the rest of dinner here at home.

~Once the groceries were all put away and the pork chop and rice casserole were in the oven, I got busy on some laundry.  I then settled in and had a glass of wine while I waited for Jeff to get home. I also put the Christmas tree lights on and had soothing Christmas music softly playing in the background. It was a busy day for me and I earned it. 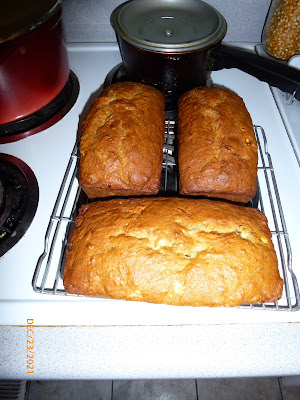 ~Despite having some not so fun eye problems, I still was able to make 8 loaves of cranberry orange bread.

~I felt bad for my hubby, who is not a fan of cranberry orange bread, so I made 3 loaves of banana bread also.  I think hanai son #4 (Lee) will be here for Christmas (staying with his father), so I had to have my banana bread made for him also.  He loves it and I make him a loaf every time he is home.

~I had leftovers for lunch.

~I made sure that the hot tub was serviced and ready to go for Jeff and I over the weekend.

~I am really dehydrated so I am pushing myself to drink lots of water and a full bottle or Powerade today.

~Dinner was some veggie fries from Nosh (Jeff and I both loved them) along with Swiss cheese and bacon sausages (also really good). 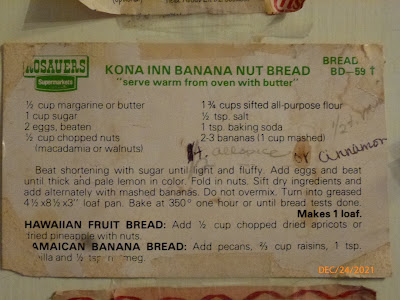 ~Jeff's workday ended at noon and they had a catered lunch brought in for all the employees.  Jeff also was blessed with a bonus, a gift card and a rather nice cost of living raise!

~I made homemade mac and cheese for Christmas.  I had leftover sauce so I made broccoli cheese soup too!  So good!

~We watched a Christmas movie.

~Our amazing neighbors decorated their ATV's and four wheeler with lots of lights and drove through town honking their horns and bringing lots of joy to everyone!

~Since tomorrow is going to be really busy, Jeff and I called my cousin Jeremy to wish him a Merry Christmas early.  We miss him dearly!

I've included two snack bread recipes here that I love and make for  our family and included pictures of here.  As you can see, the banana bread recipe is very well loved!  I do hope that all that read my blog and the wonderful friends that I have made here in the blog world have a wonderful Christmas and Happy New Year!  May you all be blessed!