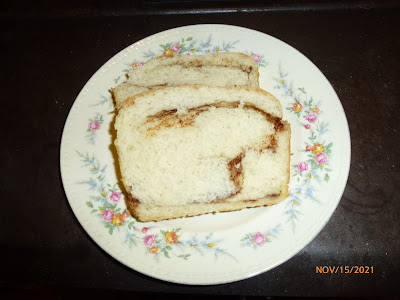 The winds outside are starting to really pick up.  We are under a high wind warning with winds up to 60 MPH and gust up to 65 MPH.  These kinds of winds really scare me because the ground is so saturated and I am terrified of the old tree next door loosing more branches or coming down all together on my house, vehicles or on my neighbor's house and vehicles.  After doing my baking this morning, getting things picked and in the dehydrator, and doing a few other things that needed doing around the house, I got busy making a large cheese lasagna for dinner tonight.  It is baking right now because I want it done before the power possibly goes out later.  If the winds pick up any worse, I will call Jeff and see if he can possibly get off a bit early so he can get home quickly.  The road that comes to our town has large trees on either side in places and I don't want  him to get hit with one of those coming down or not be able to get through to home.  Praying that things don't get worse until after he gets here.  Onto the savings...

~My cousin moved to Oregon and blessed  us with some groceries, some gorgeous crystal bar glasses and some wine for my father and some for me too.

~I've been working on organizing the pantry and finding the "holes" in it.  I found a package of tortellini in back of it and cooked that up, added a diced up tomato that my cousin had given me and then added some pesto.  YUM!  I served it in one of my many thrifted Crate and Barrel bowls.  I love having such a variety of thrifted dishes to pick from.  It just makes meal time more special.  I'm the same way with wine glasses. 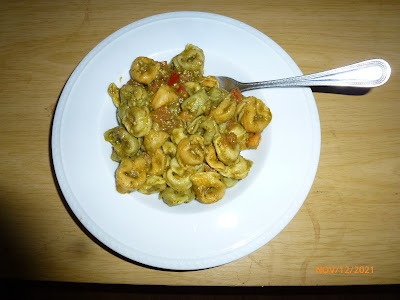 ~I made a list of the items that we need and use both in the pantry and the HBA and general home category.  Jeff and I are filling in those gaps.

~I found some more great deals at the Grocery Outlet, including the wine that my father likes at 20% off.

~Meals here have been mostly from the freezer and pantry.  I made a huge list of things I could make after taking inventory or the pantry and going on memory of what is in the freezer.

~I dehydrated and powdered up tomatoes from our garden that had ripened inside the house.

~I also had saved seeds from the parsley plants, a acorn squash and some of our bush beans.

~I harvested more Swiss chard, green onions and kale from the garden and made a nice soup with some Asian soup base and pot stickers.  I love my greens! 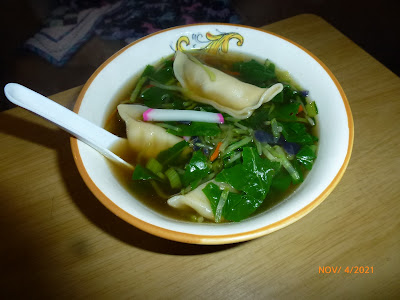 ~Jeff has been working hard on getting the outside of the house all winterized.

~With Christmas coming, I changed out the decorative plates in my kitchen to some with birds on them that have a Winter theme to them.  I love looking at them when I am in the kitchen because they remind me of my beloved Grandma who absolutely loved birds, especially cardinals.  I'm hoping one day to find some with Blue Jays on them as those remind me of my beloved GramBunny.

~I switched out the plates and the napkins to the Fall and Winter themed ones.  It just makes me happy to do this!

~I'm going through things and purging them, including kitchen appliances and cookware that I no longer use.  Jeff is thrilled about all of this since he doesn't like having to clean some of those things.

~The new cast iron skillets are all seasoned and ready to go.

~We have been enjoying using our hot tub again now that the weather is so much colder at night.  There is something just magical about sitting out there in hot water with the jets going while looking at the stars...pure bliss.

~I made more sandwich and cinnamon swirl bread.

~Running short on time one evening, I quickly washed up a sweet potato and popped it in the microwave to cook.  Meanwhile I browned up some fully cooked sausages in the cast iron skillet.  While those where cooking, I cut up half an onion, 3 leftover baked russet potatoes and then cut up the baked sweet potatoes.  When the sausages were done, it only took about 5 minutes to make the onion and potato hash.  We had a salad to go with this. 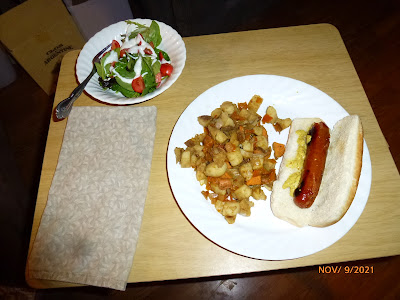 ~My vanilla extract that I made was very "alcoholy" in flavor, so I added the rest of the vanilla beans, after I split them, to the jar. Hopefully that will flavor it more.

~Kale from our garden is in the dehydrator as I type this out.  I will powder it and add it to sauces.

~Jeff cleaned out and brought in a old dresser that we had in the shed.  I used it in the pantry to sort out and store sauces, mixes, dried herbs, spices, baking needs and both rice and noodle mixes.  It is so nice to have that all done and be able to find things easily now.

~While at Goodwill the other day, I found a 10 bottle metal wine rack.  The one I currently have only stores 4 at a time.  At any given moment, I have quite a variety of wine in the house since I use it for cooking and for drinking.  I try to keep reds, whites and a variety of specialty flavored wines on hand to share with guests. The cost of the new wine rack was just $5.99, I consider that a huge bargain!

~Jeff found some lined heavy duty jeans for the Winter.  They are insulated, so they will keep him warmer when he had to be outdoors.

~The Dollar Tree finally restocked it's food section so we were able to get almost everything I had on my list from there.  They however were still missing their dishwasher powered detergent.

~I found the perfect gifts for my mother and my brother Fritz while I was at Marshall's.

~Grocery Outlet had their Kodiak Cakes chocolate chip muffin mixes marked down because they were close to the sell by date.  I will bake some of these up next week and take them to Montana with us. They also had some marked down salads that we had last night and will finish off tonight (I also had one for lunch).

Be blessed and stay safe!