It's Okay to Stop and Pivot 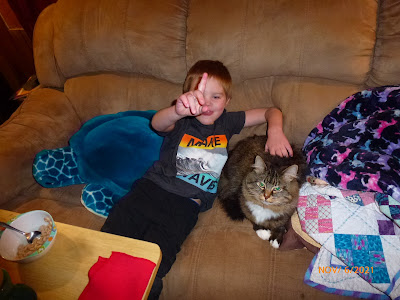 Jeff and I had plans for Saturday once he got off work to get some projects tackled here around the house.  Then we got a message from Jaysn and Rachel asking us if we could watch Steven for them while they went to a movie and had a date night.  What did we do, we pivoted and said yes!  Jeff picked Steven up after he got off work and brought him home with him.  Upon Steven's arrival, I was in the kitchen getting ready to make Chex Mix.  Steven, wanting to be a good helper, insisted that he be given an apron too so he could help.  Fine with Grammie!  I love having little helpers in the kitchen.  Steven cut up some of the butter that we needed to melt, poured the spice mix into the pan once the butter was melted and then pour a box of Chex cereal into the pan for me.  He stirred it up a bit before I added half of another box of Chex cereal and then I got that all mixed up with Steven giving it a final stir to make sure that it was fully coated.  Later, he helped us sort through the toys we have here for the grandkids and decide what he would put in the big toy bucket and what he was done playing with.  He also scrubbed the potatoes for dinner that I made into potato wedges and cooked in the Air Fryer. He is a wonderful helper!  We played with dominos, setting them up in patterns and then knocking them down (something that thrilled him beyond belief since it was new and exciting for him), had dinner and then snuggled and watched a few of his favorite shows.  When we were snuggling, Steven laid his head on me and told me how much he loved me and loved being with me.  This Grammie heart just melted and I savored this moment knowing that all too soon, he would not be as cuddly as he is now.  Yes, pivoting is a great thing when more important things come up or circumstances change.

Jeff and I have had to practice pivoting a lot lately.  Two weekends ago it was a facetime message from Bradley telling us that things were not going well on their new post and beam shed build.  I asked him if he needed G-pa to come over and help.  Yep, he asked his daddy and the answer was yes.  Again, we had plans for that day since the previous day had been spent helping my cousin get his place all loaded up into the moving truck so he could head out to Oregon the next day and start the next chapter in his life.  I was already an emotional wreck having said goodbye to my cousin, who has become more like a brother, but over we went.  I enjoyed hanging out with our Heather, her friend Heather and her mom Tammy.  We cooked together, visited and played a new to me card game while the men worked hard outside.  Meanwhile, the grandboys and their friend built a "bullpen" in the back yard with t-posts and cattle panels and took turns lassoing each other.  Those boys and their imaginations!  I love it!  After the men decided they were done for the day, Jeff and I headed into another town to do our shopping (which had been part of the plans for the day originally) and then came home and popped some pizzas in the oven to cook for dinner and lunches the next few days. Was it worth the pivot...a resounding yes and just what I needed to help me out of my funk!

I'm adjusting to an even higher dosage of one of my medications so a few days before I started the higher dose, I went shopping and stopped by one of the thrift stores in Pullman, WA.  I had some items on my list that I was looking for and found most of them there including a larger mesh scoop and carrot julienne tool for the kitchen, a plate with a chickadee on it (I had been looking for another Christmas type small plate with a bird on it to put up on the wall in my kitchen), some small bowls by one of my favorite pottery companies, two glasses in the candlewick pattern (I collect these),brand new ornaments (I needed 4 for the grandboys), 2 seasons of some of our favorite comedy shows on DVD, a new Christmas sign that makes me giggle because it reminds me so much of our oldest grandson Bradley, a few books for me and the grandboys and a pair of shorts for myself off the .25 rack.  I had a wonderful time, got some items I needed and lots that I wanted and saved a ton of money in the process!  I then went to Grocery Outlet to pick up some wine there for my father that he requested and they had a 20% off all wine purchases for that week only.  I did not know about this sale walking in but boy was I happy to hit it!  I had to ask about the where that brand of Malbec wine was and luckily they had it in.  I bought 4 bottles of it and then the lady that was helping me and I started talking about the upcoming holidays and I mentioned that I love to make mulled wine.  She told me they had just got in some mulled wine that all you had to do was heat it up...it had not even made it out to the shelves yet!  Well she brought some out and low and behold, it was from Germany and made it the same town that Josh and Lauren went to on their honeymoon and went to the Christmas Markets at.  I bought 2 bottles to surprise them with at my parents home where we will meet them in a few weeks!  I also picked up 3 rounds of Brie cheese, as it is one of my mother's favorites and some pickled asparagus.  I wanted to make things fun and easy for all involved while we are there and this way I can help spoil those I love a bit.  Originally my plans were to stay home that day but there was something telling me that I needed to go in that day and not the next.  I'm glad I did! 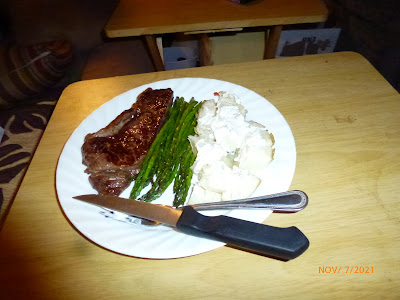 Jeff and I have been wanting to have a date night, but we are trying to avoid going out to eat in restaurants since the covid-19 deaths are going up steeply in our area for some reason.  Yes, we are vaccinated, but we don't want to become any of those breakthrough cases.  I decided that I would cook an amazing steak dinner for the two of us at home.  I found steaks on sale at Grocery Outlet ($7.99 for 2).  I also had found asparagus marked down at Walmart.  Jeremy had given me a new container of sour cream before he left that he was not going to take with him.  I made steaks, broiled asparagus, baked potatoes and I pulled out the rest of the salad that Jeremy had also given to us.  We had a lovely steak dinner for about $10 out of pocket.  That was a huge savings and again, a pivot that paid off in a big way.

My menu plan was laid out for this week, but I found that I had some broccoli slaw that needed to be used up today. I also have some cheese that needs to be used up ASAP.  So the lasagna that I had planned for tonight's dinner in being moved to another night this week and I am making broccoli cheese soup for dinner instead.  Jeff has not been finishing the two loaves of bread that I make for him weekly before they go moldy since he is now taking leftovers for lunch some days.  I decided that I needed to come up with a plan for the other loaf of bread...I then remembered that I had some leftover cinnamon streusel topping in the freezer that I had made too much of for a previous dessert.  I rolled out the dough for one of the loaves and sprinkled it with the topping, then rolled it back up.  It made the best cinnamon bread!  That definitely will not go to waste.

I had great plans to get all sorts of projects done here before we headed over to Montana in a few weeks.  Due to helping out the kids and adjusting once again to a higher dosage on my meds (which are leaving me light headed at the moment since I just started this new dosage), some of those plans have either been put on hold or modified.  But you know what, it is okay.  Yes, we are having to stop and pivot, but sometimes it leads to even better things like being able to spend that time with our kids and grandkids and help them out.  It's being able to let go of the "stress" of feeling like you have to get everything done on a tight timetable no matter what.  It's finding alternatives to "date night" out somewhere and being flexible in your menu plans so that you don't end up wasting food.  It's those moments of finding exactly what you want and need at the thrift store or grocery store on sale because you listened to the nudging and changed your plans for the day.  It's also being content at home and rediscovering things that you have at home that you had forgotten about and being able to put things aside that you no longer use to donate to a thrift store that helps people in your community.  With adjusting to this new dosage, it is a blessing not to have to go anywhere because I have everything I need right here at my fingertips because I did stock up ahead of time and got the holiday gift buying done with the exception of a few things that Jeff can pick up on his way home from work.  It's knowing that I can sleep in when needed or even nap and take my day slowly.  So pivot away without guilt because it can lead to even greater blessings!