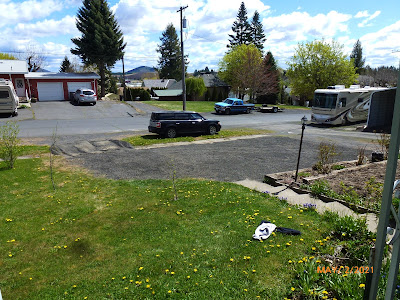 I finally feel human enough to be able to finish off this post.  Jeff and I both got our second dose of the Pfizer covid-19 vaccine on Thursday and while he got through with just a sore arm and tiredness, I did not.  I ended up sicker than a dog with teeth chatter chills, sweat pouring down me, high fever, headaches and intense body aches.  It's now Saturday and I still have a bit of a temperature, sore arm, headache some body aches but I am praying the worst is over.

~Jeff ordered 5 cubic feet of gravel to be delivered to our home to redo our driveway and rented a walk behind skid steer to help with the project.  They did not deliver the gravel on Saturday morning and gave us the runaround all day long.  They finally got it delivered mid day on Sunday so they only charged us for half a day rental on the skid steer after realizing how angry we were.

~We used some heavy duty plastic and some pellet bags to put down under the gravel in certain areas where we have bad weed breakthrough problems.

~Jeff got 2 pickup beds full of dirt from Chris and Heather's huge pile that was sitting in their yard from when they put the pad down for their future shop.  Those were used as the base layer to fill the raised garden beds that Jeff built with materials we already had on hand.

~We did spend about $100 on organic garden compost and organic aged manure to add to the garden beds.

~We laid down cardboard in the raised beds before adding the soil to use as a weed barrier.  It will compost down over time but will smother the weeds in the process.

~I took a reduced priced fully cooked chicken out of the freezer and we had part of it for a meal along with homemade baked potato salad.

~I dug up some sunflower starts, along with dill, from the garden before putting in the new garden beds so I could transplant them.

~Sunday I thawed out some homemade BBQed pork and served it on buns for our lunch.

~We used the hot tub both Saturday and Sunday night after working so hard in the yard and garden.

~The rug in the living room was filthy so I took it outside and washed it then hung it over the tall fence to dry.

~Uncle Bob (our dearly loved neighbor) came home with a walker.  He needed a tray on top of it to transport things around the house.  He asked Jeff to build him one.  Jeff was able to whip one out within 10 minutes out of lumber we had on hand.  Jeff added an edge coming down off each side on the bottom to secure it but also make it so Bob could remove it if he wanted to.

~Jeff had an interview for a new job and got it!  Yay!  Since he was already half way there (from our house) already, he proceeded down to Lewiston for the required drug test.

~I put the rest of the chicken from the weekend into the crockpot along with some veggies to cook.  I then stripped the meat off the bones and added some half and half and a can of corn to make a corn and chicken chowder.  We had some for dinner and had lots of leftovers for later in the week.

~Jeff mowed the lawn and added the grass clippings to the compost pile. I also added the veggie scraps and peeling to it.

~I cut up and froze 3 bunches of green onion tops and then put the bottoms into a container to root so I can plant them out in about a week in the garden.

~I also diced up half an onion (the other half went into the chowder) and froze that for future use.

~Since I overdid it during the weekend, I spent most of Monday looking for new recipes to try in my cookbooks using ingredients I have on hand.

~A menu plan was made based on what we have on hand and needs to be used ASAP.

~Jeff and I went to 2 thrift stores looking for jeans for him.  We did find a pair at one of them, along with a pajama gown for me, a locking lid salad bowl and a spoon rest. We both saw other things we like but did not need so we did not buy them.

~We decided to go out for an early dinner to celebrate Jeff's new job.  We went to our favorite place that serves sushi along with lots of other amazing Asian dishes.  Our sweet waitress came over with 2 fried sushi rolls that she said were miss ordered and asked if we would like then for free.  We said yes since I was planning on ordering sushi anyway.  Jeff ordered what he wanted and we brought half his meal plus one of the sushi rolls home with us because we were so full.  We left her a very generous tip for her kindness and the excellent service.

~We did stop at WSU to see the bears again since it was on our way.  I love watching them lumber along and play. :)

~Both Jeff and I tackled folding several loads of laundry together, sorting as we went as to what to keep and what to donate.

~The cats and I spent some time out on the back porch in the morning while Jeff slept.  It is wonderful to be able to use it again as a dining room/living room and expands our home floor space.

~I cooked up some ground venison into taco meat and we had taco salads for our big meal of the day.  Yum!

~Tulips from the garden were picked and put in a vase to brighten up the inside of our home.  We are expecting possible hailstorms tomorrow so I wanted to make sure I got some in before the hail had a chance to destroy them.

~I looked at the grocery ads on line and did not see a single thing on sale that we needed.  I did notice another hike in prices though...YIKES!

~I talked to Chris and he wants some of the excess strawberry plants too.  Yay!  They will be divided equally between Steven and Chris. 😉

~Jeff and I got our second dose of the Pfizer vaccine and they had treats there for everyone.

~I found huge packages of mild smoked sausages for $1.97 at Grocery Outlet.  I bought two of them for our big family party later this month.  I also found peach iced tea mix and bought some of that to have on hand this summer.  It is one of my favorite drinks.

~Jeff made nachos for us for dinner with the leftover taco meat.

~Oh my goodness was I ever sick with the side effects from the second Pfizer vaccine.  Needless to say we did not go anywhere or do much at all.

~I covered up some plants with boxes to keep them from freezing.

I did start my grocery envelope system and put $100 into it.  I will add another $100 in two weeks when Jeff is paid again.  It really does help me to have to deal in cash because it really makes me think about what I am spending.  Hopefully this will be a good way to keep that all under control.