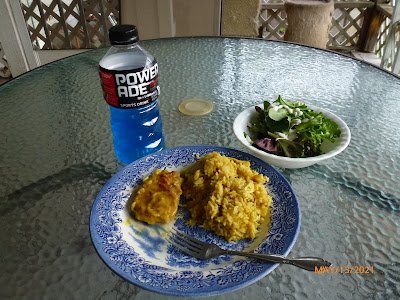 What a week it has been!  I went from being sicker than a dog from my reaction to my second Pfizer covid vaccine to slowly coming out of that and feeling semi "normal" again.  Even with that, I did manage to get quite a bit done in the garden, along with some cooking.  We did not go hungry by any means. 😉  Today, Friday, is the first day that I am finally free from any obvious side effects from the vaccine and I am so grateful for that.  Do I regret getting it?  Still no.  Onto the frugal doings:

~We worked in the garden getting the raised beds ready to plant.  Jeff put cardboard on the bottoms of the two remaining beds to block the weeds.

~I made 2 move loaves of bread.

~Jeff and I were craving tuna pasta salad so I went out to the garden, got some green onions and then pulled tuna, pasta and mayo out of the pantry.

~I was feverish both Friday and Saturday night with my reaction to my second dose of the Pfizer covid-19 vaccine so I washed all of the bedding from the guest bed and the mater bedroom bed and hung it out to dry on the laundry line.  It smelled so good and was heavenly to crawl into bed Sunday night.

~Jeff made us grilled cheese sandwiches for dinner on Sunday night...mine even had tomato in it just the way I like it.  😋  I know it was Mother's Day but all I wanted to do was stay home and have a relaxing day.

~We talked to all the kids and my parents this weekend either by phone or facetime.

~Jeff and I went down to our town's assisted living care center to visit with Uncle Bob and got to see several other friends we have not seen in ages also.  We also stopped at the bank to visit with another good friend and at the little store to see if their prices were similar to many at the larger stores....surprisingly, many of them were!

~I made fajitas for lunch.  I already had cooked chicken fajita meat so I just zapped it in the microwave with a quarter of a frozen chopped onion and a sliced up fresh yellow pepper.  So easy and so good!

~Since I was wanting something different to drink, I mixed up a pitcher of peach iced tea.  Oh how I have missed that!

~The green onion bottoms that I had stuck in water after cutting off the tops were finally rooted out enough for me to plant in one of the new raised garden beds.  YES!

~Since I woke up way too early this morning, I gave myself permission to take a much needed nap.  I slept for 3 hours.  I had not planned on sleeping that long but apparently I needed it.

~I got two of the raised garden beds seeded in with assorted lettuces, kale, spinach, radishes and bush beans.  I also got my blue columbine planted.

~The garden bench was in rough shape after sitting out all Fall and Winter.  I gave it a good scrub down so it is presentable again.

~The strawberry bed, raspberry, blackberry and blueberry bushes, along with the rhubarb all got a good watering.

~After doing way too much I ended up in a huge amount of pain (also still dealing with of the covid-19 vaccine after effects UGH) and could barely move.  Jeff got a frozen pizza out of the freezer and we had that for dinner.  I had gotten it on sale previously and it was perfect for a day like this.

~I curled up in bed after dinner and watched money saving videos on YouTube.  I was glad that i did because I had forgotten the concept of weighing decisions based on "how many hours of work will it take to pay for item x, y, or z and is it worth it).  Great reminder!

~Jeff and I ran into Pullman to Walmart to get more soil for one of our raised beds in the garden.  While there I found a queen sized sheet set on clearance for $15!  I bought it since it will be prefect for the guest bed with the warmer weather coming on.  I also found salad mix, cheesecake and hoagie rolls on clearance.  I resisted the urge to buy a bunch more plants even though many of them were on clearance.

~While in town, we ran up to some of the college student apartments and went "treasure hunting".  I found half a case of brand new quart sized canning jars, new shoes in their boxes (will be reselling these), gardening supplies, clothing and show knows what else.  I still have a huge tote to go through full of stuff.

~I was really craving some good burgers so I made some at home for dinner and served that along with some homemade applesauce that I had pulled out of the freezer earlier in the day.

~The mail brought a lovely surprise of a refund check for part of my health insurance payments from way back in 2015.  Hey, I'll take it!  It also brought a free magazine, Country Living, which I will enjoy reading later today.

~I got the squash planted today.

~Jeff and I dug up some of the errant strawberry plants and got them potted up for Steven.

~Jaysn and Steven came for a visit to borrow our blow up air bed since they have some of Rachel's cousins and their kids staying with them this weekend.  Steven was very excited about his strawberry plants that Grammie and G-pa gave him. :)

~Jaysn blessed us with half a gallon of milk.  That was really sweet of him.

~I made a pork chop and rice casserole for dinner.

~I spent the morning on my screened in porch getting caught up on things online and enjoying my coffee.  One of the neighborhood cats decided to come into our backyard for a visit.  My cats were so deeply asleep that they did not even notice.  LOL!

~I hung Jeff's work clothing up on the line to dry after I washed them.  It is so nice to be able to do that again!

~We have an abundance of pineapple mint growing in one of our front beds by the house.  I grabbed a big handful of the mint, rinsed it and then steeped in in boiling water to make some mint tea.  I love this cold on a hot day.

~Jeff and I have both been craving Subway sandwiches so I made my own version of them here at home for lunch.  Much healthier and way cheaper since I had bought smoke turkey slices lunchmeat when it was on sale and frozen it. I got that for $1 a package.  Even with making thick sandwiches, I still have enough meat for one more.

~Jeff and I went down to visit Uncle Bob and helped him with a few things.  I let him know that Chris was going to be coming down in the morning to see him also.  He seemed very pleased about that. :)

~It has been unseasonably hot here and just getting hotter in the next few days.  I made good use of the bamboo blinds we put up on the back porch last year to cut the amount of sun coming in.  I also got the glider rocker all decked out in it's bench pad (an old body pillow that I cover with a twin sized fitted sheet) and a comfy pillow to rest my head on when I lay down and read.  Patchy greatly approves. 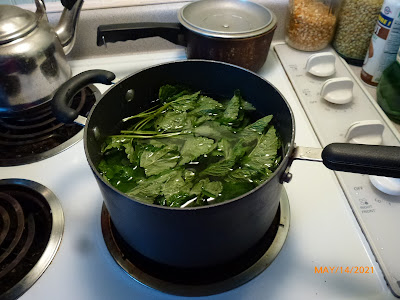 Jeff only has one more week at his current job and then moves on to his new job.  I can tell that he is totally burnt out at this point but continues to do his best, even when asked to go above and beyond at the last minute for others.  Tonight he is doing his route and one of the other routes by himself.  Yes, he will get compensated for it, but it is frustrating to find out at the last minute (this morning) that the other guy wanted time off tonight and yet Jeff has been turned down for time off even when he asks in advance.  Putting in the extra hours tonight will mean that he will be exhausted tomorrow when Chris, Heather and the big grandboys come over in the morning.  We had also planned on going somewhere on Sunday, but we shall play that by ear at this point.  We shall see how Jeff and I are both doing at that point since the heat tends to make me ill.  Be blessed!