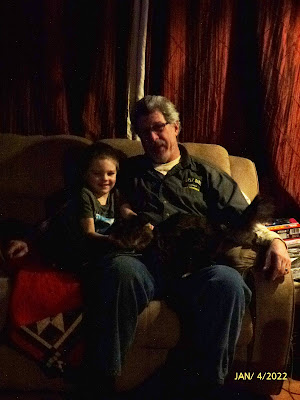 Well hello again!  It has been an eventful week filled with snowstorms, horrible roads, some frugal fails, etc..  However, not all is gloom and doom.  Remember my saying that I am always looking for those Silver Linings?  The best one of the week was being able to have our grandson Steven spend the night midweek since his daycare is still shut down and his parents needed to be able to get back to work.  Oh that was so much fun for me!  He is simply a wonderful little guy and we both enjoyed each other's company.  Now onto the frugal doings in no particular order since I again failed to keep track of them as they happened.

~Steven spent the night with us on Tuesday. G-pa brought him home after getting off work.  We had cuddle time, stories were read and he fell asleep very quickly that night.  He did wake up at 4 a.m., but went right back to sleep when I told him it was still nighttime and that it was not time to get up yet.  He then slept until 8:30 a.m.!  Wednesday morning found Steven and I here alone without Jeff who had to go to work.  It was way too cold with the windchill to go outside so we found some fun things to do inside.  We made cookies and we decorated them with sprinkles...so many sprinkles!  LOL!  He took some home with him to share with his parents later when they came to pick him up. We played a bible character memory game, which he was amazing at (it is a matching game that I had here and had found at a thrift store for .49 years ago), played with toys and he actually caught the elusive Midgy cat and was quite proud of himself for doing so. We cuddled up in Grammie's bed and he watched a construction vehicles video while Grammie got some much needed rest and then we played construction site later.  Here are a few snippets of our conversations and my observations that I posted on Facebook, gosh I love this kid and he keeps me on my toes!:

Oh yes, life with a 4 year old...tells me he wants fruit gummies for dinner and that is what his parents let him have. LOL! Good try kiddo but Grammie knows better.

He didn't want the chicken strips and French fries, so cereal it was! Breakfast was fruit cereal bars and cheese. He was really hungry.

I think we will skip making a snowman because the winds are cold. Onto cookie making it is!

Yet another adventure with the 4 year old grandson Steven...
Steven: "Well my construction hat fell in the toilet" He says while wearing it on his head. "It's okay, I washed it in sink".
Grammie: "could you please put the hat in the bathtub to dry and the towel in the laundry room"
Steven: "Sure"
Grammie: "Here Steven, you can wear my construction hat".
~I sent some of the cookies to one of our friends that works with Jeff and she loved them!
~Here is where the frugal fail happened. Jeff and I had an agreement that we would not be eating out this month so that we could save money and pay off some of our bills sooner. Here is where the frugal fail happened...Jeff ate out twice for lunch. We had a talk about this and why we were trying to NOT do that...he is back on board with the plan once again. We want to get my car paid off and then work on a few other bills big time.
~I made two loaves of bread. We went through one very quickly when we had chicken salad sandwiches for dinner one night.
~Leftovers were on the menu several times during the week.
~I stayed home all week long and happily did so. I was able to get some reading done and work on a few things around the house.
~Jeff stayed home from work on Thursday since the roads were absolutely horrible! There was blowing and drifting snow and so many accidents. A semi truck was even blown right over on it's side and shut down one of the main highways right outside of Pullman! We spent a cozy day together and we both even took naps.
~I watched a few movies during the week on YouTube. Gotta love having that resource for movies from all genres.
~Jeff was so sweet and got all the birthdays and anniversaries filled in on our 2022 calendar.
~I went through the refrigerator and made a grocery list of things that we are getting low on and will need in the near future. Most of it is fresh fruit and veggies. I really am trying not to spend much at all on groceries this month since we do have lots of frozen and canned goods here.
~I've been gathering more recipes on things like hoagie rolls, and more veggie rich main dishes to try. 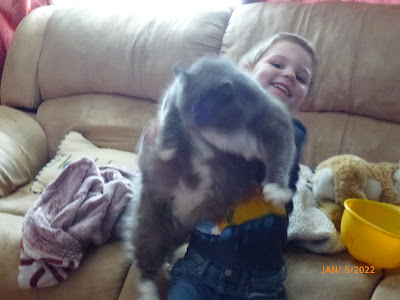 I think that is about it for what I can remember at the moment. Nothing earth shattering when I comes to saving money. It really is the small savings that add up though. Be blessed!