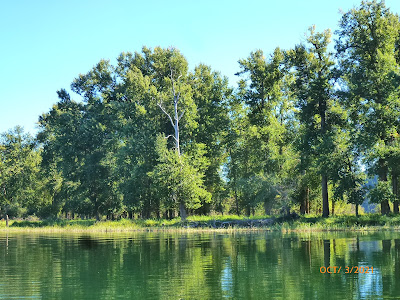 ~We worked in that gardens and picked another 2 quarts of blackberries.  I froze them.

~Sunday found us out on the boat with Chris.  I took snacks and drinks with us.  I also took lots of pictures.  It was a wonderful day despite almost getting swamped by the wake of a cruise boat coming up the river who did not slow down.  I was left really bruised and swollen on my "seat end" from the pounding I took going over the wake waves.  Amazingly I stayed calm the entire time while Chris and Jeff got really concerned.  I knew Chris had enough experience and knew how to hit those waves head on and when to speed up to avoid getting swamps.  Chris is an amazing fisherman too and caught lots of perch to take home and threw about the same amount back in the water because they were smaller.  He ended up with 15 fish!  We will be going over for fish tacos in the near future.

~All the sheets were washed and hung up on the line to dry.  I also put the feather bed on the guest bed.  Boy did that feel good given how bruised and swollen I ended up on Sunday and of course there is nothing better than crawling into lined dried bed linens at night.

~I made a Teriyaki meatloaf and served it with rice and a side of pear slices from our garden along with some baby carrots.

~We stopped in to see my cousin Jeremy and his super sweet pittie dog Maggy.  He gave me the dehydrator he picked up for me (he ended up getting it for free).  He also said the he did not want to take his 5x8 foot enclosed trailer with him when he moves, so he is giving it to us.  What a blessing for our whole family to use.  We are also going to be trading living room furniture.  He is taking our brown loveseat and newer brown recliner (they are both lighter in weight than his are) and we are taking his tan colored reclining couch and loveseat.  I am really going to miss him but I know that he is someone who really does not like to stay put in one place too long and he has been here longer than he has been in most places.  We are still within a days drive from each other and I do look forward to going to visit him and being able to go to the Oregon coast.

~Jeff got the front flower garden bed all trimmed back since we are expecting killing frost on Wednesday.

~I worked in the gardens harvesting basil, sage rosemary, green onions, tomatoes, squash and beans.  The herbs were all put in the dehydrator, along with some of the green onions.  They will be wonderful for seasoning meals!

~We had not had Scrapple for a long time so I made some using turkey sausage since it is much lower in fat.  I used some sage that I had previously harvested and dehydrated in it.

~I took all the green onions that I harvested from the garden and cut them up.  I ended up with 4 1/2 cups of cut up green onions.  I'm thinking I may dehydrate them once the other herbs are done in the dehydrator rather than freezing them.  It will take up less space that way.

Tuesday: (we are expecting a killing frost Wednesday)

~I picked all the tomatoes that were a good size but still green off the plants to ripen slowly inside the house.

~All the Swiss chard was harvested.

~I picked all the cucumbers, green peppers that we good sized, cantaloupe that were close to ripeness (hopefully they will still be good) and squash.

~I also picked all the ripe blackberries.

~This is the last warm day so I spent time outside enjoying it before we drop into the 50's for daytime highs.

~Leftover Scrapple and 2 cups of coffee were my breakfast today before I started harvesting stuff.

~I pulled out most of the tomato, cucumber, and all the bean plants out.

~For dinner I made a stroganoff with caramelized onions and 4 slices of roast beef from the deli.  I served it over mashed potatoes.

~I had leftovers for lunch.

~I was getting that "nudging" again to go and get the shopping done before prices go up again.  I was shocked to see some of the prices on meat had gone up, even at Grocery Outlet.  I did pick up things like cereal, more spices, a big jug of olive oil (I use olive oil as my primary cooking oil here), a few frozen items, canned tomato products, egg noodles, and both beef and chicken stock.  These items came from both Grocery Outlet and Dollar Tree combined.  I also picked up some HBA items at Dollar Tree like two 3 packs of toothbrushes, face wipes and I also found the movie "Caddie Woodlawn" there.  The author of the book the movie was based on lived in Moscow, Idaho where my husband was born. Oh I picked up some house slippers too!

~The thrift store is my go to place for magazines and books, home décor and some clothing items.  I picked up a nice J Jill sweater, a new sports bra, some Fall decorations, Country Woman magazines and 3 books.  One of the books was a cookbook put together in 1979 by the ladies on my little farming community.  It is so much fun to look through it and see so many familiar names and realize that I ate some of the food that the recipes were so generously shared in this cookbook.  Most of the people are now in heaven, but I treasure having this "tie" to them.

~I knew the frost was coming so I had Jeff move the potted herb plants to the hot tub area.  I also did one last picking of things.

~Dinner was baked sausage and cheese balls, a salad and we each had half of a small cantaloupe from the garden.

~I cooked up the Italian Sausage that I had thawed out so it would not go bad.  I will use it Friday to make Zuppa Toscana.  I'll make a big pot of it since Jaysn, Rachel and Steven are coming out Saturday to pick apples at the orchard and we can have it for lunch.  I know both Jaysn and Rachel love it and I can always make Steven and peanut butter sandwich if he would prefer that.

~I was right, the gardens were hit hard by frost.  Luckily the blackberries still seem ok and are still producing.  Everything else, except for the kale, is a goner.  Looks like it is time to finish cleaning out the garden so it is ready for next Spring.

~I packaged up the dehydrated herbs and got half of the green onions I sliced up earlier in the week going.

~The other half of of the green onions were frozen.

~Jeff is gone bowling on Thursday nights so I treat myself to a nice meal that he does not care for but I like.  Tonight it was lobster ravioli that I found for $4.99 at the Grocery Outlet.  I had a glass of wine, some pear slices (from our pears from our trees) and some sourdough  toast with it.  YUMMY!

~Not a frugal day at all!  I took some medication to help with my anxiety and it knocked me out.  Jeff ended up bringing home dinner for us.