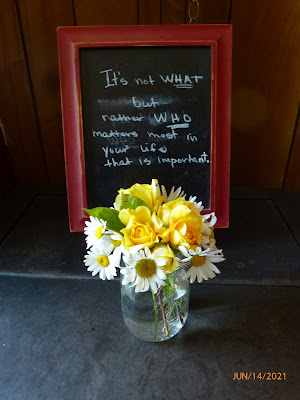 Oh my goodness, this week has been a rollercoaster of emotions.  It started out so wonderfully but took an ugly turn on Tuesday that left me totally shaken and feeling unsafe in my own home.  I won't go into many details other than to say that someone we know acted out in a totally uncharacteristic for them way.  They hurled false accusations at me, threatened physical violence against one of my sons and threatened to have Jeff and I arrested.  All this happened in my home while Jeff was at work.  Jeff of course wanted to protect me when he heard what happened but I asked him to please let things cool down first (I was in tears). I did let my son know what happened (he is a police officer) and of course he said all the claims made were baseless and he will be working on things from his end also.  We are trying to get this situation dealt with and see if anything can be done to get the person who did this some help...like I said, totally out of character for them so something is definitely going on but they cannot and will not be allowed to ever pull a stunt like this again.  They were projecting their insecurities and issues upon us. This all threw me into a big Fibro flare (stress is a huge trigger for me) and left me making sure that doors are locked at all times when I am home now.

~We stayed home so that no gas was used in the car.  It was Jeff's 3 day weekend and we concentrated on getting things done around the house.

~Jeff was able to "fix" my recliner so it works better for me again.  He will use the new one we bought.

~I made homemade pizza and waffles over the weekend...Yummy!

~We watched the movie "Grease" that we have here on DVD.  Fun!

~We also used the hot tub.

~I harvested some spinach and basil, along with strawberries.

~We switched out our clothing to the warmer weather clothes...neither of us needs any more clothes at the moment.

~I also made up bags of clothing to donate or try to sell at the consignment store.

~I made some more "maple" syrup for hubby since he finished off the real stuff. 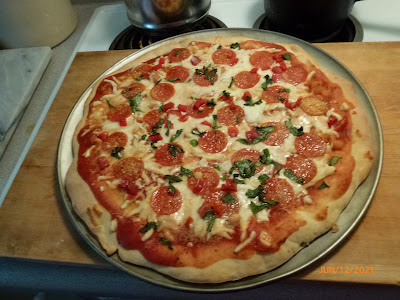 ~Jeff potted up some oregano, strawberry and raspberry plants to take with him to work on Tuesday to share with his coworkers who are starting gardens.

~I made a big pasta salad and used oregano and basil from the garden again in it.

~More spinach was harvested...it is so good this time of year and our spinach plants are really producing well.

~Our roses and Shasta daisies are blooming so I picked some and made a small bouquet.  It just looks so "happy" in the living room. 😊

~We are expecting some strong storms to roll through our area so all the potted plants and new starts have been safely (I hope) tucked away in the hot tub area to protect then from large hail and high winds.

~Jeff did his best to try to secure lumber across the raised beds to help protect the plants there also.

~Jeff talked to Uncle Bob and he is letting us put the truck under his carport to help protect it.  It has a cracked windshield and if hit just right with hail, might shatter.  We do not have the funds at the moment to replace it.

~We had pastrami sandwiches and fries for dinner.  Yum!

~I blessed a friend with a lot of green onions from our garden...she was thrilled!  I love sharing our bounty with friends. 😊 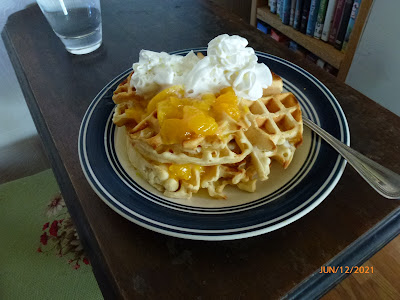 ~Jeff uncovered all the raised garden beds before he went to work so they can get a good soaking from the rain later in the day.

~Going over the budget yet again to see what further cuts we can make.  We did pay off the hospital bill taking money out of savings to do so but I still need to make more cuts, without totally depleting our savings, to balance the budget.

~Found another way to cut the budget...paying off the credit card in full so we do not have that monthly payment.  I still have money left in savings for an emergency.

~I picked strawberries from the garden and put all the potted plants back out so the rain can soak them well.  No need to water today!

~Later in the day another storm front came through so I moved all the potted plants back under cover and moved the truck's front into our neighbor's carport so that the front windshield would not be shattered by hail. UGH...my back is now screaming at me.

~Dinner was homemade Zuppa Toscana (from the freezer) and crescent rolls.

~Jeff used the chainsaw Jeremy gave him for Christmas to cut up a branch that came down into our front yard during the storm. 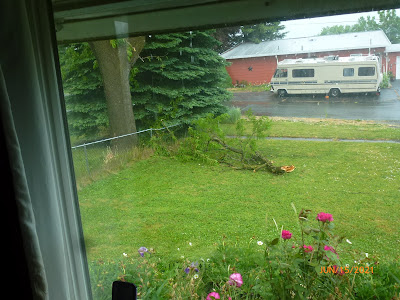 ~Rough day all the way around so we had leftover pasta salad with spinach (from our garden) added to it and Pastrami sandwiches.

~I made some popcorn and we watch "The Happiest Millionaire" on the Disney+ channel.

~Jeff picked up milk and bananas on his way home from work.

~I did some weeding in the garden.

~I picked a few strawberries from the garden also.

~Jeff's car is acting up so he had to buy some parts to fix it.  Another hit to the tight budget.  It is still cheaper than taking it in to have it done though.  I will just have to cut the grocery budget down to $40 for the rest of the month.  We can do it though because we are well stocked up.  Thank you God for blessing us with such abundance that things like this won't cause a crisis for us. 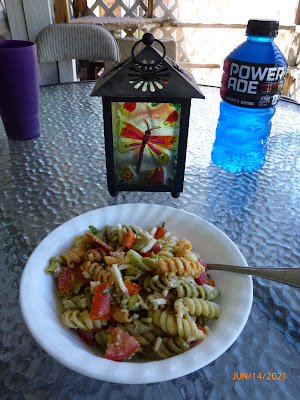 ~I baked 2 loaves of sandwich bread and made croutons with the leftover ends of the other loaves.

~While the oven was still hot, I baked up 5 potatoes that needed to be used up ASAP.  I will make these into a delicious potato salad since the heat is coming on strong outside in the next few days.

~I picked spinach, baby kale and radishes from the garden and made a nice salad with them to go along with dinner.

~Dinner was a pork stroganoff over rice, served along side that salad.

~I scrubbed most of the rust off (as much as I could) my old metal birdbath and let that dry.  Later in the afternoon I painted it with some black Rustoleum paint.  It looks beautiful again!  I can't wait to use it in the garden.

~I had a nice chat with both Uncle Bob and my hanai sister Shannon.  I love them both so very much!

~I "fed" the compost pile again.

~Watering was done in the evening.

~Jeff took a Italian Prune Plum tree that had volunteers in our yard to one of his coworkers who is starting a garden at her home.  She was thrilled and so touched that he would gift her with it. 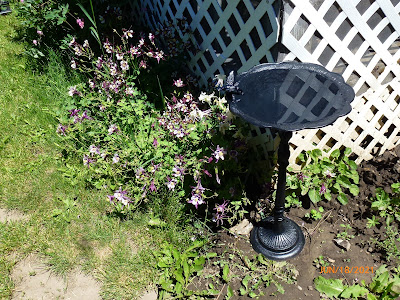 ~With the rhubarb I made Jeff's favorite rhubarb cake as an early Father's Day gift.  Jeff claims to not like rhubarb but he loves this cake...go figure. I get a huge kick out of it really. 😉

~I used those potatoes that I baked on Thursday to make a baked potato salad.  I added green onions and chives from the garden and used plain yogurt and celery salt for the "dressing".  I figured this was a "healthierish" (yes, I made that word up) salad.  We had it with fish and green beans as a side dish with dinner and there were still plenty of leftovers.

~Jeff and I got out in the evening into the garden and he weeded a bit while I watered.  I was thrilled so see some of the Cos lettuce coming up next to the zucchini plants.  The leaves of the zucchini will provide some much needed shade for the lettuce as the days get hotter.

~Patchy cat developed a UTI.  I looked online for homeopathic remedies since we cannot afford a vet bill right now.  I dosed her up with some cranberry capsules and then had Jeff stop by Petco to pick up some HomeoPet UTI medication.  I asked him to have them price match their online price instead of paying the instore price (which was $10 more) and they did.  Hopefully this will clear things up for her.  She is not running a fever and seems to be her normal self for the most part so I think we caught it early enough for this to work for her. 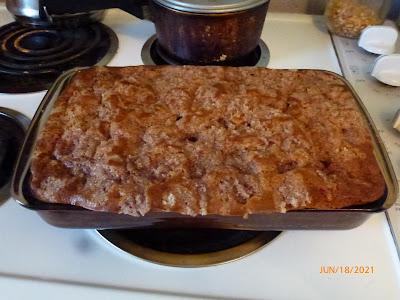 So that is what is going on here.  We are heading into much hotter weather this coming week so Jeff and I will try to get as much done as we can this weekend to get the gardens ready for that.  Since the spinach is starting to bolt, I may just take that out this coming week, strip down the leaves and plant something else that thrives in heat in it's place. Crop rotation is a good thing!  I am also thinking of planting some more lettuce and spinach in a shaded part of the back yard garden where the soaker hose is that goes to the raspberry and blackberry patches.  It should do well there and will get the water it needs without me having to hand water it.  I'm still waiting to see if the carrots and pepper plants come up in the front raised bed.  If they don't I will see if I can find a half price closeout sale on pepper plants at the stores and pick some up that way.  Still trying to grow as much as we can here.