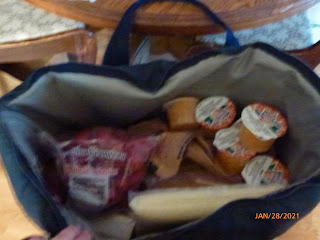 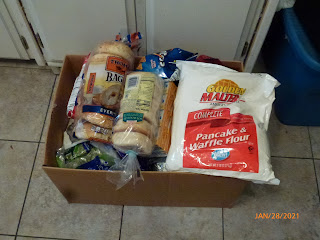 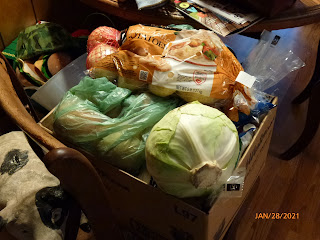 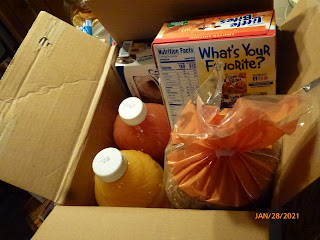 A peek inside of the bag and boxes that we were blessed with at the commodities giveaway.  So much stuff that will really help with the grocery budget and some to share with the rest of our family also.  I know some little buys who are going to enjoy the juice boxes that are packed in one of these awesome blessing boxes.

I'm impressing myself.  I am actually getting this post typed up late Friday night and will most likely get it posted right after midnight.  YES!  😎  As anyone who reads my blog knows, this is NOT normal for me and I am usually a few days behind (or more).  The fact that I am even sitting up in the living room and have not crawled into bed in a miracle in itself.  This has been a horrible week Fibromyalgia flare wise and the majority of the time has found me in bed.  My sinuses were killing me earlier today but then it snowed and the swelling went down.  Maybe I needed the moisture in the air to feel better?  Who knows...all that matters is that I am doing better now right?  Anyway, onto the very limited frugal doings for the week: 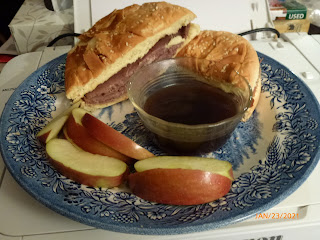 ~I made French Dip sandwiches and served them with fresh apple slices for dinner. I had bought the roast beef on sale from the Walmart deli awhile back and just popped it in the freezer until I needed it.

~I had some leftover au jus and will be using that in another meal later in the week.

~Jeff and I hot tubbed.

~Jeff watched an old Western movie on YouTube in the living room while I watched old episodes of The Ghost and Ms. Muir in the bedroom.

~I spent most of the day in bed with a bad flare.

~I did manage to make dinner...ravioli, garlic bread and a salad.

~I called again about my missing phone...have to call back on Wednesday to see if they will send me a different model since they are now out of the one I originally had.  UGH!

~Dinner was leftovers and makeovers.  Jeff had leftover ravioli and I used a leftover Salisbury steak, some leftover au jus, a bit of plain yogurt and made stroganoff which I served over mashed potatoes.  There remained had enough leftover for another meal.

~I "fed" the compost pile with kitchen scraps. 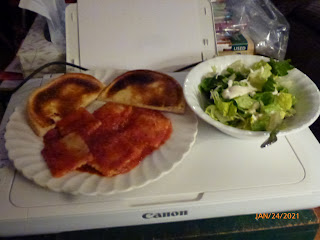 ~I spent a lot of time in our big pantry rearranging things and found that I had way more soy sauce than I thought I had.  I won't have to buy that for a long while.

~I managed to make dinner using some ground venison that Chris gave us along with a Velveeta Skillet meal kit that was about .32 cents at the Grocery Outlet.  It was pretty darned good!  I hope they have more the next time I go to the store at that price.

~I found a season of a TV show online and watched that via YouTube.

~Lunch was a bowl of cottage cheese with about half a can of mixed fruit in it. 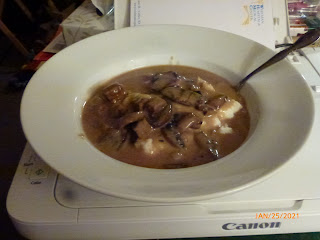 ~I made two loaves of bread.

~As soon as the bread came out of the oven I popped in two pizzas, one for dinner and one for leftovers to eat for another meal.

~Jeff ran down and got commodities.  As usual they loaded him up!  Shampoo was a nice non food bonus this time.  We got frozen meats,  fresh and frozen potatoes, frozen strawberries, about 6 pounds of butter, yogurt, canned goods breads, pastries, grapes, tons of canned goods, juices, waffle and pancake mix, dried fruits and nuts, tuna and so much more.  I feel so blessed!

~I made a nice cup of tea in the evening.

~My prescriptions were delivered.

~Some homemade chicken noodle soup was pulled out of the freezer and heated up for dinner.  There were leftovers for another meal.

~I went through some of my cleaning supplies and found some magic erasers that I wanted to use to clean the kitchen cabinets and backsplash.

~I watched more inspirational videos about cooking from the pantry.  I think it is good to get new ideas and vary our menu a bit more.

~Josh has been sending me videos and pictures each day of Tate.  Jeff and I are so enjoying watching him grow from afar. Only a few more weeks and we get to actually see and hold him!

~I chatted with my cousin and he will be going down for a job interview in Oregon soon.  If he gets the job then he will be moving and we will be getting his living room furniture since he does not want to take it with him.  I will try to sell our furniture that we have now and send the money to him.  He does not know that is the plan, but it is!  Shhhhhh......😉

~While doing some purging, I found some Air Jordon shoes that I will be selling on a local sales site. 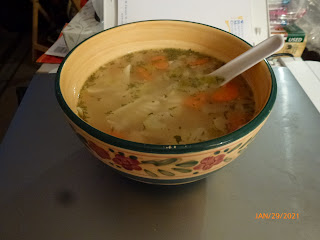 Our Covid-19 numbers are going up again and I am worried about the new variants that have made their way up to the United States.  We do have the UK variant over on the west side of the state which means it will be here within a few weeks time, if not less.  I need to really be careful to limit possible exposure since we have Josh, Lauren and Tate coming up to stay with us in a few weeks.  I would hate to get this and them not be able to come. I know we will have to make another trip to the grocery store soon to pick up a few things, but I may just do the curbside pickup and spend a bit more money unless Jeff and I decide to make a very early morning run into town and go to Winco.  We will see.  I know that this weekend we plan on getting the guest bedroom ready for the kids and that means a total clean out, taking the bunk beds down and setting the new bed up.  I may see if Jaysn can come out and help with that.  It would be nice to have him, Rachel and Steven come out for a visit anyway.  It has been way too long since we have seen all three of them and I know they are trying to be very careful too but really do want to come out.  😊