Huge Scare for Hawaii and our Family 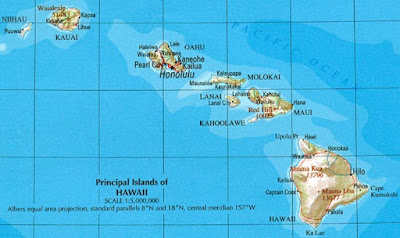 I am sure that everyone saw the news that Hawaii had a Incoming Nuclear Missile alert sent out on Saturday 1/13/17 in the morning hours.  I am so thankful it turned out to be a false alarm and was caused by someone accidentally activating and sending out the alert.  There were not fail safes in place but that has since be revised and now there are.  I did not know about it until later in the day but was absolutely heartbroken for my friends and family that went through that awful scare.  My nephew is in Hawaii on Oahu going to college, my sister was still there getting him settled in and was heading back to Tahiti later that day and my parents were also in Hawaii on the Big Island visiting friends there.  Having grown up there, I still have many friends and extended family there and reading about how terrified they all were just shook me to the core.  I'd like to share with you a post that my childhood friend Billy V, who was like a little brother to me, shared on his public Profession Facebook page.  He is a newscaster in Hawaii now and I am so proud of him for achieving his dream!  He and I still keep in contact.  There is a strong bond between people who grew up together in Hawaii that I have not seen as much of with people who grew up on the mainland.  I think it is a cultural thing.  Anyway, here is his post...I cried while reading it just thinking about what he was going through.

I was on Liliha street headed to Magic Island when I got the alert. Driving and couldnʻt believe my eyes. I couldnʻt breathe. I was shaking. My mother-in-law who doesnʻt speak english and my yorkie dog in the backseat. Made a decision I canʻt make it to Sand Island in 15 min. Wife and son will have to do what they can. Panic starts to set in. I made an immediate U-turn and was back at the house in 3 min. I told Mom go in the house. Korean missile launch. She understands and runs in. I run across to my neighbor who works at Diamond Head with Emergency Management. He just got off the phone to find it was a false alarm. Iʻm starting to hyperventilate, hands shaking, called News Director. Let him know. Get off the phone to start to text wife and son. 8:15am. Still hands shaking. Canʻt text. Tears falling.
Run back to house and notice HNN text messages are going like crazy. Decide best is to get dressed and head to station. Traffic canʻt move fast enough. Ian and I both run into the station together. Ianʻs prescence is immediately calming. Work is easiest to focus on, heart still running high on adrenaline. Others running in and immediately picking up. Team nods at each other as they come in. Game Faces. Mic on. IFB on. Finally in front of camera. Finally feeling calm. Michael Harris says go. Work Begins. I feel better.
I donʻt want to have that fear ever again. Not knowing if I saw my wife and son for the final time. Breathe.....*sigh*
See you guys at MPI Basketball Homecoming, then UH Basketball tonight.
My celebration of being here continues...#HugYourFriendsandFamily

After finishing, I rushed home to hug my family. As we ate a late lunch, my wife and I started to cry as we walked each other thru what happened in our eventful day.
My wife and son were at Magic Island for the ILH Regatta. Everyoneʻs phones went off at the same time. There were screams and almost instant running. The streets became jammed with cars. People were running across Ala Moana Blvd almost getting hit. MPI Coaches told the team to go to the Ala Moana Hotel Building. Kids started running. Cars trying to get out. It started to be chaos. Kids calling their parents telling them they love them in case they donʻt make it. Parents screaming into their phones trying to find where their kids are, because they were with their teams preparing for their turn in the canoes and the parents waiting on Magic Island. First canoes hadnʻt launched yet, so they were all by the wall all together as teams when the alerts first came in. My wife got a hold of my son, who told her he was running for the Ala Moana hotel building. My wife tries to calm him saying it will be all right, she will meet and find him there.
He made it to the hotel driveway when I texted him to tell him at 8:15am it was a false alarm. He told his team and coach who confirmed with other coaches. They made their way back to the Yacht Club near Magic Island. My wife met him there. They went home.

This is what my friend Billy went through and shared.  I have heard many other terrifying accounts from my friends there also.  As one of them said, if they were struck by a Nuclear Missile, he would not want to survive the initial blast because he would not want to have to deal with the radiation poisoning that would slowly and painfully kill him and his precious family.  He also pointed out that even if they somehow escaped that on the Big Island (Oahu would be the target due to the big military bases, but the Big Island might also be hit since there is also a smaller training base located there too), that the harbors would be severely damaged where the barges come in with most of the food and other goods from the mainland.  Hawaii is not set up with Nuclear Fallout Shelters and if there were actual incoming missiles, there is only about 12-15 minutes before they would hit.  That is not enough time to find a suitable shelter or to get your home buttoned up air tight.  The panic was horrible in Hawaii.  My friends are having nightmares now.  I cannot imagine the absolute terror they were going through and I am thankful that I did not know about it until after it was found to be a false alarm or I would have been terrified for all of them as well.  The thought of loosing my parents, my sister and my nephew, along with all of my dear and much loved friends  and hanai family brings me to tears.  I pray that they never have to go through this again.  My friend Billy is right though...Hug your friends and family...you never know when it may be the last time you do.