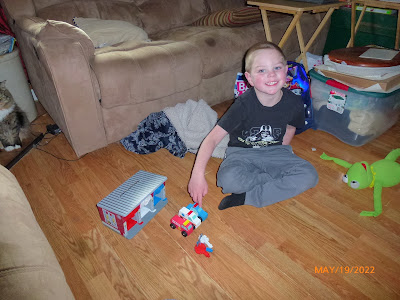 This has been a busy week for us with baseball games, and most importantly, Steven turning 5 years old on Thursday!  How can that be?  I remember the first time I held him in the hospital and our first sleepover together when he was just days old as his beautiful momma battled for her life in the hospital.  I am so thankful for answered prayers and the wonderful staff there that finally figured out what was going on and saved her life, while at the same time allowing Steven to bunk in with her for most of it.  Yes, I overdid it once again, especially while still battling the remnants of this virus.  It usually takes me a good three weeks to clear these things from my body, so about 2 more weeks to go.  Now onto the frugal doings!

~Jeff worked on the greenhouse and finally got it done!  Yay!

~I was sick so meals were simple and easy.  One of the meals I made was teriyaki meatballs over rice, a salad made from lettuce, spinach, Swiss chard and kale.  I also had radishes and green onions from the garden.

~Sadly we had to miss Steven's birthday party.  I hated to have to do it, but did not want to get everyone else sick.  Due to having autoimmune issues, I get hit really hard and it takes me a long time to recover from any illnesses.

~I moved all the plants and seedlings into the greenhouse.

~The weather was so nice for most of Sunday, so I could open up the sliding glass doors to the screened in porch and let the house air out.  The cats loved being able to come in and out.

~Jeff got the lawn mowed for the second time in a week.  It is growing so fast due to all the rain.

~Two loaves of fresh bread were made, much to Jeff's delight.

~Leftovers were for dinner.

~Jeff and I headed into Pullman to pick up a prescription a and to pick up some groceries and needed items.  We were very careful in what we bought since prices are going up and we also saw many empty shelves.  I did find a great deal on 5 pound bags of Manderin oranges, so I picked up one of those since we will have Bradley and Isaiah spending the night on Saturday night and they love them and go through lots of them at a time. We also picked up a thermometer for inside the greenhouse so that I can monitor the temperature as to not fry the poor plants.

~Jeff bought 2 5 gallon gas cans at Walmart for the same price that he would have paid for one elsewhere.

~I cleaned out the refrigerator and took inventory of what we have in there.

~Jeff was off so he got the raspberry patch all pruned, cleaned up and tied back again.

~I harvested more radishes from the garden.  I added the small tender "seedling" leaves to our salad.  I love to snack on radishes at this time of year when they are crunchy and not so hot.

~Craving something "summer like", I made a large tuna pasta salad using up some celery that needed used ASAP, some green onion, and some dried dill from last year's garden in it.  I save the root ends of the green onions and have them growing in water right now.  I will transplant them out into the garden in a few days for more fresh green onions.

~Laundry was hung out on the line to dry.

~I picked more tulips from the garden to put in a vase inside the house.  I am really enjoying being able to change out the colors since my tulips come in at different times.

~We picked up Isaiah and Bradley from their Grandma Tammy's dance studio and took them down to Bradley's baseball game.  He did so well!  Meanwhile, Isaiah and his cousin Joby wiped out several times on the skateboard and came to me for wipes to get their scrapes cleaned off.  They went through most of the wipes that I had.  Luckily those wipes were free from Safeway earlier in the year and did not sting, so that made it easier for the boys.

~I was completely wiped out from all the frugal doings and going to the game, along with dealing with the stress of an extended scary family medical issue.  I slept in until 10:50 a.m..  YIKES!  Yes, I am also still dealing with the summer cold too, which I am sure also played a part in it.  I decided to just be kind to myself and have a slower day since I will have Steven for the next 2 days and then have Bradley and Isaiah overnight on Saturday.

~I put some beautiful music on YouTube and got the digital coupons loaded up on my Safeway card.  I also checked out the other grocery store ads online.

~I had pulled some cooked squash and onions out of the freezer the previous day and used it today to make a squash casserole.

~Dinner was a sheet pan dinner of Italian sausage and sweet potatoes.  We had the sausage on buns and Jeff had a green salad while I had squash casserole as a side dish.

~It was our Steven's birthday!  He turned 5 years old.  Jeff and I got him an emergency vehicle garage with an ambulance, police car and fire truck complete with keys to lock the garage up.  We also got him a towel for the pool this summer.  I had found the toy at Goodwill and the towel was on clearance at the end of last summer.  I had put them back for his birthday and am so glad I did since the cost of everything is going up so high right now.

~Steven and I spent the day together and watched "The Land Before Time".  He is really into dinosaurs right now.

~He and I picked some radishes and spinach from the garden and watered the plants in the greenhouse.

~We made cookies for us and for him to take home.

~Rainwater was used to water the plants in the greenhouse.

~Dinner was cheesy shredded potatoes, the leftover Italian sausages and a spinach salad.  Cheesecake for dessert.

~Steven and I worked on his numbers using dominos to match and count numbers and also worked on writing the letters A and B and also learning their sounds.  We read stories and did an I Spy book.

~Steven had hot dogs for lunch and I had some of my squash casserole.

~Jeff stopped by the grocery store and got potatoes, onions and milk on his way home from work.

~Steven and I got squash (3 kinds), flowers, cucumbers and more basil all seeded into pots, watered and into the greenhouse.  He loved the new watering wand Jeff bought for me and tried out all the different settings.

~Steven cleaned off the top of the hot tub cover with , you guessed it, the new watering wand. 😉

~Jeff and I had leftovers and sandwiches for dinner since I was so wiped out.

~During the day, Auntie Shannon (my hanai sister and next door neighbor), invited us over to play with her dogs, cats and to see the frog eggs and tadpoles in her pond.  She left a container out for us to use whenever we came over, even if she was not home 😊 , to scoop up some water and see how the tadpoles are growing into frogs.  I think this is going to be wonderful for Steven to see their growth cycle and will be amazed at the little frog legs as they form on the tadpoles.

I hope that everyone is doing well and continuing to stock up on things and putting in a garden or even things growing in pots.  With the way grocery prices are going up, we are all going to need to be doing all we can to try and cut corners somewhere.  I figured that Jeff and I have already saved about $20 on salad fixings and radishes from those being grown in our garden.  I have lots more coming on too, so we will be eating well! I'm sure you have seen the news about some of our gas stations running out of gas over here in Eastern Washington State and I can confirm that is true.  One of our neighbors works at a Mobil gas station in Pullman and they have run out multiple times.  They are not getting the deliveries that they usually get of gas and it is really hurting their business.  I pray that he is not laid off because of the lack of customers due to the lack of gas.  Get some gas can my friends and fill them up!  You never know when the gas pumps may run dry and you need that fuel for you vehicle.