Well folks, it's been another rough week with yet another friend passing away.  That makes 4 in a 2 week period. My heart is aching for the families and friends of all of them.  Sleep has been eluding me for the most part and the smoke from the wildfires and the intense heat have not helped at all.  I have been doing my best to stay upbeat for the most part, but it really has been wearing heavily on me.  I love being able to go out and putter in my garden, it brings me great joy, so I have been out there whenever the heat and the smoke clears enough to allow it.  Other than that, I have been spending lots of time indoors trying to get some projects done while attempting to stay cool.  Here are my frugal doings for the week: 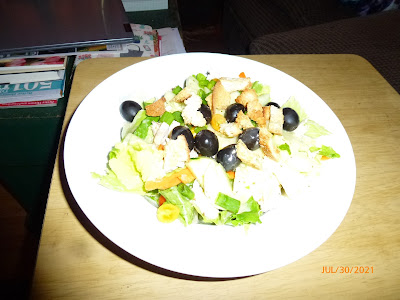 ~I made two huge salads for Jeff and I and we added lots of chicken and some of our favorite toppings and add ins to each of our salads.  I added cucumbers, olives, green onion, halved cherry tomatoes from the garden, carrots, homemade croutons and then tossed it all with some Olive Garden salad dressing.  Jeff added shredded cheese, carrots, lots of homemade croutons and Thousand Island dressing to his.

~It was our town wide yard sales.  It was not well advertised and many people here in town had no idea it was even going on so there were not a whole lot of sales.  I did manage to find another sled for Jaysn, Rachel and Steven (got that for free) and I got the Christy series on DVD for $1.  It was good to be able to visit with neighbors and see some of my old students too. :)

~I picked raspberries while it was still cool in the morning.  I could not be out long though due to all the wildfire smoke in the air.  After having a huge coughing fit, I came inside, had coffee and made some phone calls.

~Jeff and I went to Winco and stocked up on things that will be going way up in price here soon due to crop failures.  Get that coffee now!

~We also went to Dollar Tree to pick up some things there like cleaning supplies and a few food items.

~We Facetimes with Josh, Lauren and Tate.  So much fun!

~Jeff stopped by the clothing consignment store that we had some things at and picked up what had not sold and also picked up our earnings from what had.  $56 is not bad from things that we no longer use or want.

~We had the chicken soup over rice for dinner.

~We stocked up on a few more things at Grocery Outlet and Walmart.  We also stopped at Safeway and picked up 2 packages of cheese for .77 each and a 12 pack of tonic water.  Since I used our gift card at Safeway, we got it all for free.

~I picked more raspberries and a few more squash from the garden.

~I froze 2 packages of Mexican Chicken and Rice Soup.

~I also froze a package of cooked rice.  I love having cooked rice on hand to just thaw and use.

~The squash plants got a good trimming back and I found 3 more squash in the process that I picked.  I also picked a handful of beans.

~I took the last of the cooked chicken and made enchiladas with it for dinner.  Since I felt the chicken filling was "bulky" enough, I added some finely diced yellow squash to it.  Extra nutrition and it takes on the flavors around it.

~My hanai sister/neighbor Shannon came over to pick some raspberries and we had a nice visit.  She had been gone on a trip for a little over a week and I had missed her.

~Jeff ordered a new regulator hose that goes from the BBQ grill to the propane tank. 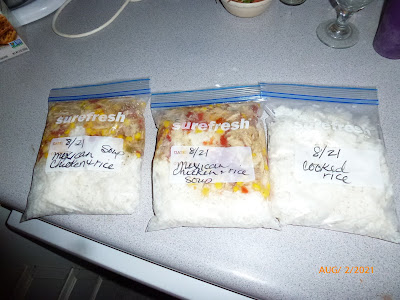 ~I did a bunch of hand washing of clothing and hung it up in the bathroom to dry.

~I did some more "purging" from my closet.  I will try to sell what I can at the consignment store and will donate the rest.

~I used some of my points at Recycle Bank to get two 20 month magazine subscriptions for free.  I will read them and then donate them to our town's library.

~Dinner was a cheeseburger and tomato macaroni skillet dinner along with a big side salad of Romaine lettuce, yellow bell peppers and carrots.  I added some black olives to mine since I already had some in the refrigerator that needed to be used.

~Jeff took leftovers for his lunch at work.

~I rearranged the furniture in the living room.  It gave it a whole new look.  Jeff just has to help me move the big couch out now.  We are either going to sell it or give it away.

~I watched some Garden Home shows on Roku.

~More squash and tomatoes were harvested.

~Huge taco salads were on the menu for dinner.

~Jeff stopped and picked up some bananas and mushrooms at a produce sale that one of the stores was having.

~The raspberry bushes are winding down but I still managed to find a handful to pick.  I also picked a few more of the ripening blackberries.  I also found a few more squash and picked those too.

~It was a much cooler day so I did not have to run the AC.

~I made a list of things I need to pick up at the Dollar Tree the next time I am in there.  Does anyone else use clothespins to close up things like chip bags?  I find these have worked great over the years.  I have no idea where all the ones I had inside the house have gone so it is time to buy another bag.

~While going through some framed pictures, I found one of a honu (Hawaiian sea turtle) that I love and switched it out with another picture in the guest bathroom.  Yes, I switch up décor in the bathrooms as well as the rest of the house.

~Jeff and I went out to dinner and then did some shopping.  I needed to pick up a few things at Dollar Tree.  We also stopped at a yard sale and I got some kitchen cooking bags for .50.

~Jeff and I watched one of the X-men movies on Disney.  Don't ask me which one because I have no idea.  Jeff likes to watch them and I was on the computer part of the time.

Midgy wishes you all Sweet Dreams! 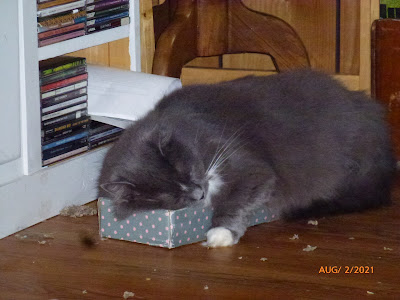