Amazing Friends, Family and a Frugal (and Normal) DITL 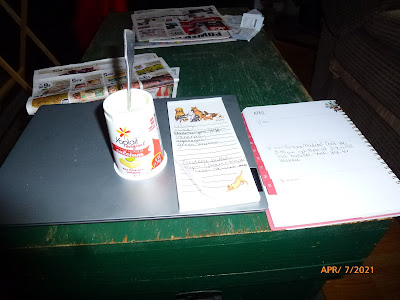 So there I was last night and into the early morning hours trying to secure another Covid-19 vaccine appointment for Jeff and I and still hitting a brick wall.  One of the places that had the vaccine available would not take us because we were not "current patients" there even though Jeff has been seen by them in the past.  One of my dear friends saw my post on Facebook about my frustration in trying to book an appointment and told me to let her check into things for me.  She called today and was able to get us in at that place that said they were only taking current patients because she pulled the "friend card".  She is a nurse but I did not know where she was working and it turns out that she works in that very office!  So much love for our Minnie!!!  She is also one of Chris's "bonus moms" as I am to her son Nathan.  I am so very grateful for all our friends in the medical community who have been there time and time again for us helping us get appointments, referrals, etc. when we have either been told they can't take us or we will have to wait for months to get in to be seen.

Jeff and I are breathing a huge sigh of relief today between that great news and finding out that the dirt Chris had removed to make a nice pad for his future shop will work as fill dirt for our raised beds.  That dirt has had years of cows grazing on it before Chris bought it so lots of built in fertilizer. 😉 Chris and Heather have been wanting it gone for awhile now so this works out well for us all!   Chris and Heather even fed us dinner while we were out there yesterday afternoon/evening.  They had caught a bunch of fresh bass the day before so we had a fish fry.  YUMMY!  I took out a bunch of asparagus because I know they love that and I had two bunches here at home.  Sunday Jaysn and Rachel had us over for Easter, along with her mom Joyce and my cousin Jeremy.  We all contributed a dish to the meal and it was so good.  It was also wonderful to see Joyce again.  We had not seen her in over a year so we got caught up on each other's lives. 💖

So this week I have failed miserably in keeping track of my frugal doings so I thought I would just do a post on a typical day in my life.  And yes, it's boring but can be rather productive on those days when I do have the energy to do things.  Some days NONE of this happens, but today is a good day.

We got the phone call from our dear Minnie about getting us appointments, which woke Jeff and I both up (not complaining at all).  Jeff and I had been so stressed out about all of this and it has been leaving us emotionally drained.  We had coffee, Jeff worked on getting the bills done, checks written and all ready to mail off  after he deposits his check tomorrow morning.  I took one look at Jeff after that was done and could tell he was struggling to stay awake.  I sent him back to bed to get more sleep before he goes to work tonight.

While he slept, I got busy with doing a load of laundry and then getting the bread dough mixed up and rising.  When the dough had risen, I got the two loaves baked and started in on the pork chop and rice casserole so I could pop that in the oven when the bread came out.  Not wanting to waste any of that heat in the oven, I made some cookies and put those in when the casserole was done.  We had green onions that needed to be chopped up and frozen, so I cut the two bunches of those up, saving the bottoms of them and sticking them in a cup with water so that the roots would grow for about a week before I plant them out in my garden.  I lost some of my green onion plants out there over the Winter, so I needed to fill in some gaps.  Green onions...the gift that keeps on giving!  There was also a bag of fresh green beans that needed to be used, so I got those all cut up and cooked to go with our pork chop and rice casserole.  During all this, I realized that I forgot to eat up until I started cooking so I grabbed a yogurt to tide me over.

In between the cooking and laundry, I worked on scanning through the grocery and garden center ads.  I also uploaded coupons onto my Safeway card and made a grocery list of things we needed at both the regular grocery store and at Grocery Outlet (we get our snack type things like chips there and yes, Jeff loves his nachos and we are about out of tortilla chips and potato chips that he takes with his lunches).  We will go in early next week before our vaccine appointment and get the shopping done, then go down for our shots. Jeff is also off that night so that makes things less hectic. We really don't need much so the shopping should go quickly.   All the stores we need to go to are within a 2 block range from the medical office so that works out great!

Plans for this evening are to go over the couch with a damp washcloth to get the cat hair off it (never ending job) and then fold two loads of laundry while watching some "trash" TV.  Don't judge me, we all have our ways of dealing with stress and one of mine is watch the Real Housewives series.  I can get as mad as I want with some of their antics that remind me of people I know and then just turn it off and NOT have to deal with them.  LOL!  Yes, again, one of my many maladaptive coping skills but hey, it works for me and that is all that matters. 😛