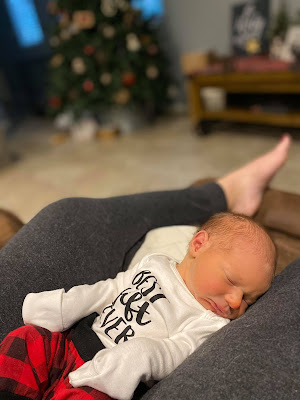 Our newest grandson, Tate Michael, made his glorious entrance into the world on Monday, December 14, 2020 at 7:22 p.m..  That was the exact same time of birth as his father Josh and the nurses at the hospital took to calling him "Daddy's little clone". 😉  He actually came on his due date without any induction needed and Jeff and I have joked that his mommy had it all planned out since she is a logistics officer in the Air Force reserves and it is also her job as a civilian working on base. 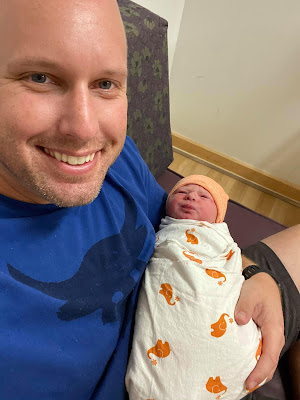 The picture above is Josh holding his son Tate when Tate was just hours old.  Josh is thrilled to be a daddy and said that Lauren, his beautiful wife and Tate's mommy, is the strongest woman he knows!  Lauren really is awesome! 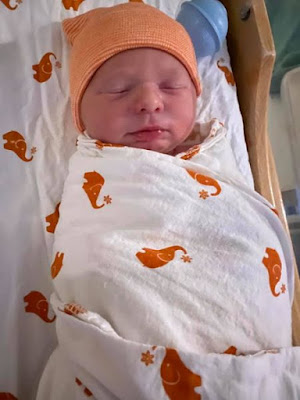 Tate's big cousins are all very happy to have a baby cousin but Steven was a little confused by seeing a picture of Tate after he was born and the clamp on his belly button.  Rachel tried to explain what was going on there, in terms a 3 year old can understand, and told him it would fall off when it dried out.  Apparently when Steven talked to his Auntie Lauren, he told her that her baby was broken. 😮 Good thing his Auntie loves him and understood why he thought that and he got straightened out quickly that no, his baby cousin was not broken, that all babies started out that way.  LOL! 😁   I'm telling you, you never know what these grandboys of ours will come up with next and they have no filter!  It's ok though, my mother (Tutu) does not have one either so they come by it naturally. 😛 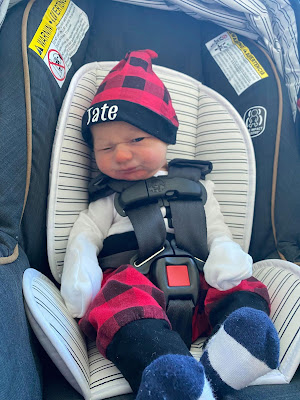 Jeff and I are convinced that this little guy will have a big attitude like his other three cousins on this side of the family.  The Sarcasm Gene runs deep and so far none have escaped that. It just makes life all that more interesting. 😉 Sadly Jeff and I will have to wait awhile to meet our little Tate in person due to Covid-19 rules and the fact that we want to be extra cautious and protect him from possible exposure.  For now we will get lots of pictures and even facetime as much as we can.  It is wonderful being able to see him that was too...but I just want to snuggle this little one so badly.  I have never had to wait to meet the other three. I met and cuddled them within hours of their births, so this is a new experience for me and for Jeff too.  I guess that will just make it all the sweeter when we do finally get to hold him.  Feeling so very blessed and happy to see Josh and Lauren become parents and for us to add another grandson to love to our ever growing tribe!